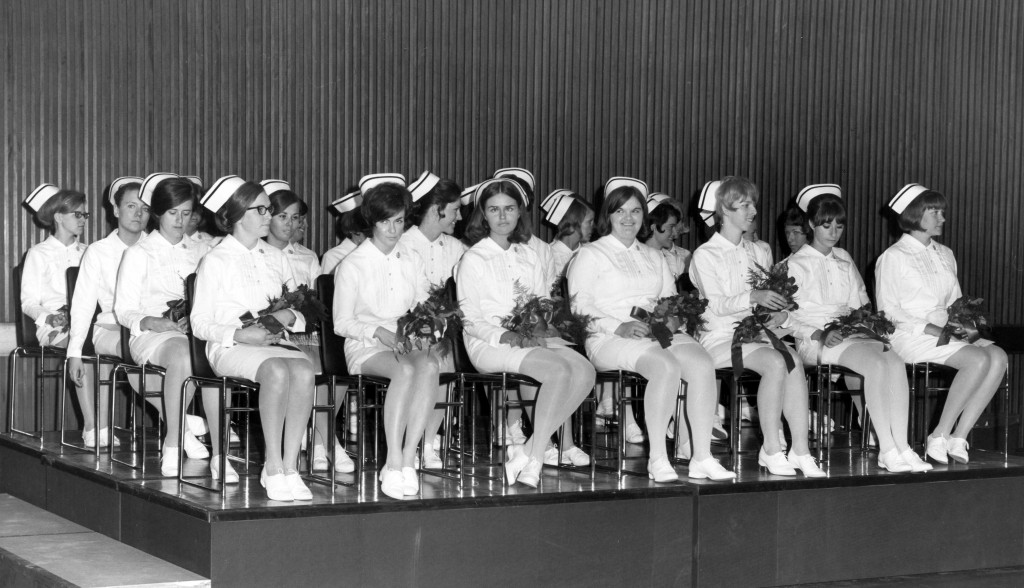 Graduation ceremony for the Class of 1969.

Beginning as early as the 1930s in Canada, there was talk about moving nursing education away from hospitals and into colleges and universities. Hospitals were very reluctant to support this change. Nursing schools provided them with a dependable, controlled and inexpensive workforce.

But as the nursing profession advanced and became more technical, nursing schools had to evolve too. During the 1960s, many schools, like the Women’s College Hospital School of Nursing, experimented with changes to their curriculum and length of program.

Ultimately, the changes were not enough. In September 1973, the Ontario Government closed hospital-based nursing schools. The schools at Women’s College Hospital, the Wellesley Hospital and the Hospital for Sick Children joined to form a nursing program at the Ryerson Polytechnical Institute.

In 1975, the last nursing class graduated from the Women’s College Hospital School of Nursing.

The closure meant that the Alumnae Association had to change, too. It began focusing more on helping its members stay in touch with each other, through an ongoing newsletter and an annual dinner.

The friendships formed during the student nurses’ training days still run strong today. And, although the Women’s College Hospital School of Nursing has closed its doors, its story is kept alive through the writings, spoken words, photographs and – of course – memories of its students.