Maintaining a two-hundred-year-old mill according to the principles of heritage conservation has always required a great deal of care and patience. It is essential to follow the rules of the trade. According to Ernest Labelle, former chair of the Corporation du Moulin Légaré (CML)’s Board of Directors and now a volunteer, one of the most sought-after skills among volunteers was their ability to do manual work or at least their willingness to give it a try. While various small jobs had to be carried out regularly, a number of major projects were undertaken by board administrators and CML members. Here, volunteers tell us about some of these projects.

In the early 1990s, chair Léon Tremblay and his team cleaned and rebuilt the floor of the mill.

View this video with a transcript: Léon Tremblay on cleaning and rebuilding the floor of the mill

In 1992, the board decided to demolish the shed that was used as a garage by the Légaré family and replace it with a rest stop where people could buy buckwheat crêpes and light meals during the summer. The building can also accommodate the various groups that visit the mill.

The shed used by the Légaré family was demolished to make room for the Moulin Légaré rest stop. 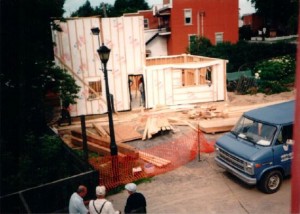 The construction of the rest stop in the summer of 1992.

By 1997, it was clear that the turbines at the Moulin Légaré were in need of repair. The Corporation du Moulin Légaré (CML) contacted Hydro-Québec to inquire if the government-owned corporation could do this work. After a series of discussions, Hydro-Québec’s engineers carried out the repairs of the turbines in 1999 and 2000, at no charge to the CML.

Those repairs allowed one of the millstone assemblies that had been out of service for many years to be brought back into operation. Below, volunteers tell us this was possible, thanks to the acquisition of a second bolter (large sifter).

View this video with a transcript: The Wakefield Bolter

Daniel Saint-Pierre explains more about what was involved in getting the second millstone assembly operating again. He also explains why those repairs were so important in boosting flour production and helping the mill thrive even more.

View this video with a transcript: Daniel Saint-Pierre on bringing the millstone assembly back into operation