In order to fulfill the mill’s mission and to keep it operating and thriving, a miller needed to be hired. Corporation du Moulin Légaré (CML) members started to consider this problem in 1977.

During the first years, the CML sometimes had to rely on the know-how of the Légaré brothers to mill the grain. As part of the agreement, they were entitled to continue living in the miller’s house for ten years after the sale of the mill. In the end, they stayed until 1995. There were times when their presence and their attachment to the mill created challenges for the CML when it came to taking the steps required to keep the mill running. For example, volunteers told us that members of the Légaré family had even denied CML members access to the mill by locking the doors from the inside. Despite these minor incidents, on several occasions, the Légaré brothers agreed to share their know-how with those running the mill, even after they had retired. In fact, the board payed Donat Légaré to mill the grain from time to time, and Philippe Légaré passed on his skills and knowledge to the apprentice millers who were hired.

In July 1978, Luc Marineau was brought to the mill as an apprentice miller, sometimes working with Donat and Philippe Légaré. His contract was renewed from season to season, depending on his availability. He continued as miller until 1987, except for the period between 1981 and 1983 when Gérald Charbonneau took over the responsibility for putting the millstones into motion.

In 1987, Daniel Saint-Pierre met with the members of the CML board and was hired as a miller, and he still has the job today, in 2015. His 28 years in that position have allowed the Moulin Légaré to stabilize its operations and make them more systematic. As an employee, he has spent an incredible amount of time cleaning and maintaining the building, and has helped volunteers by participating in a host of repair projects at the mill.

Miller Daniel Saint-Pierre discusses his involvement and the future of his trade.

View this video with a transcript: Daniel Saint-Pierre on the futur of milling

Since 2007, Daniel Saint-Pierre has been passing on his milling knowledge and skills to Martin Trudel. 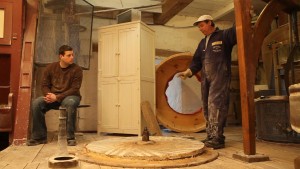 Daniel Saint-Pierre (right) explains to Martin Trudel (left) the process of dressing the millstones, which involves sharpening the stones to optimize the milling of the grain.