Members of the Corporation du Moulin Légaré (CML)’s interim committee, which had been meeting regularly since 1976, quickly decided to constitute CML as a para-municipal corporation. The benefits of that kind of structure were discussed at a meeting held on April 13, 1976. The members present believed such an organization would:

That was how the CML was officially established on July 2, 1976, when the letters patent certifying its founding were received. The purpose of the Corporation is described in the letters as follows: 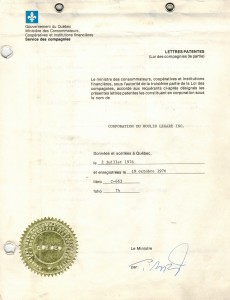 The letters patent provided and sealed on July 2, 1976, and registered on October 19, 1976, constitute an attestation of the CML’s legal status.

For the past forty years, this structure has ensured the survival of the CML and allowed it to successfully fulfill its mission: to preserve the Moulin Légaré. From the very beginning, the corporation’s vision went beyond simply ensuring that the mill continued to exist. The founding members’ goal was to keep the mill “very much alive”. This meant not only maintaining the physical structure and machinery but also keeping it fully operational and ensuring that there were millers who were able to produce flour in it. It also meant providing access to this heritage treasure to as many people as possible.

Jacques Lecours, one of the first chairs of the CML, explains how the board members pursued this mission.

View this video with a transcript: Jacques Lecours: “a citizens’ project”

Jacques Lecours explains his initial vision for the Moulin Légaré in more detail.

View this video with a transcript: Jacques Lecours: a forerunner of the “economuseum”