A pre-1905 postcard of Manoir Fraser, one of a series of postcards representing significant sites in Fraserville at the beginning of the 20th century.

Built in 1830, this venerable building located in the heart of the historical section of Rivière-du-Loup became a seignorial manor in 1834 when it was bought by Alexandre Fraser. Four generations of the Fraser family lived there over a period of 150 years.

Over time, the people of Rivière-du-Loup, or “Louperivois” as they are known in French, developed a strong attachment to the manor and to the Fraser family. When the property went unused for years after its sale in 1979, a number of citizens, aware of the crucial importance of the building and its inhabitants to local history, became active in the conservation efforts.

This restoration project would never have been possible without the involvement of many volunteers and the inestimable support of partner organizations such as The Canadian Heritage of Quebec, the Quebec Ministère de la Culture et des Communications, and the city of Rivière-du-Loup. They all worked unceasingly to bring about the rebirth of Manoir Fraser and to ensure that its story live on, in our history books and in our memories. We invite you to discover how it all unfolded.

This exhibit has been created by the Société de sauvegarde du Patrimoine du Grand-Portage, the organisation that manages the Manoir seigneurial Fraser. 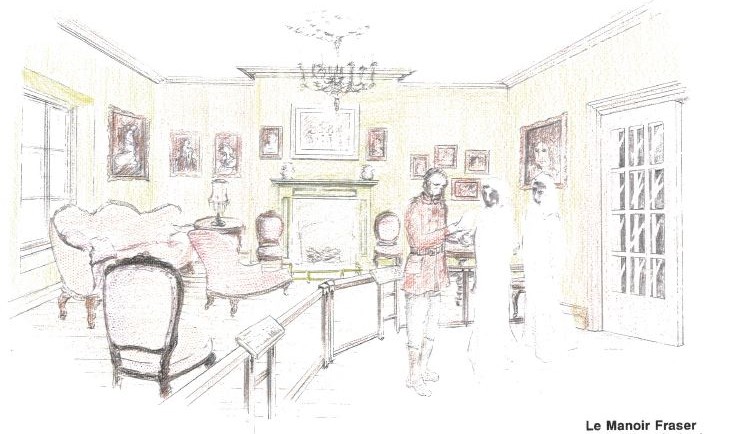 Sketch of the layout of an exhibition room at the Manoir, circa 1994