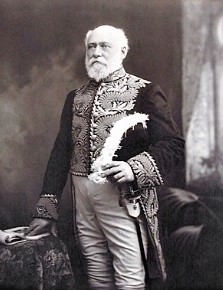 Jabez Bunting Snowball represented Chatham in the House of Commons as a Liberal from 1878 to 1882. After a period in the Senate he served from 1902 – 1907 as New Brunswick’s Lieutenant Governor.

In this role, as official representative of the king, LG Snowball had a active role overseeing the debate between groups campaigning for reform and the political establishment.