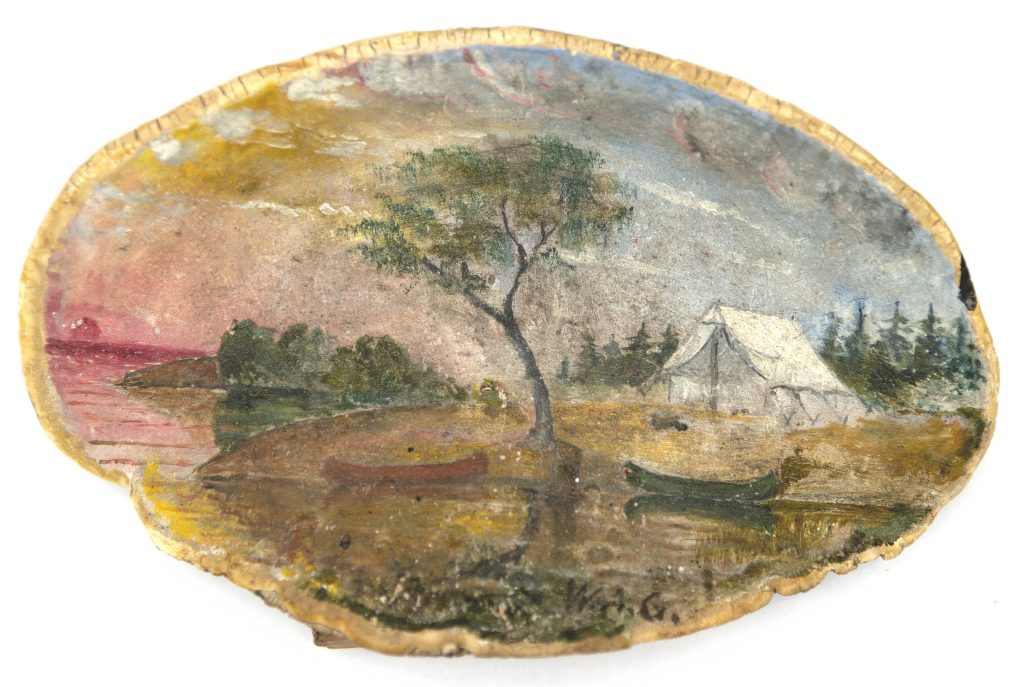 Despite his considerable output, it is unlikely that W.A. Goodwin received formal training. Like the French painter Henri Rousseau (1844-1910), who claimed to “have no teacher other than nature,” Goodwin stands in the tradition of self-taught artists whose work is usually described as being naïve, or primitive. Unlike Rousseau and other naïve artists of the 19th and early 20th Centuries, however, Goodwin’s work is strikingly realistic. Bright colours are used sparingly, and his use of perspective is believable. 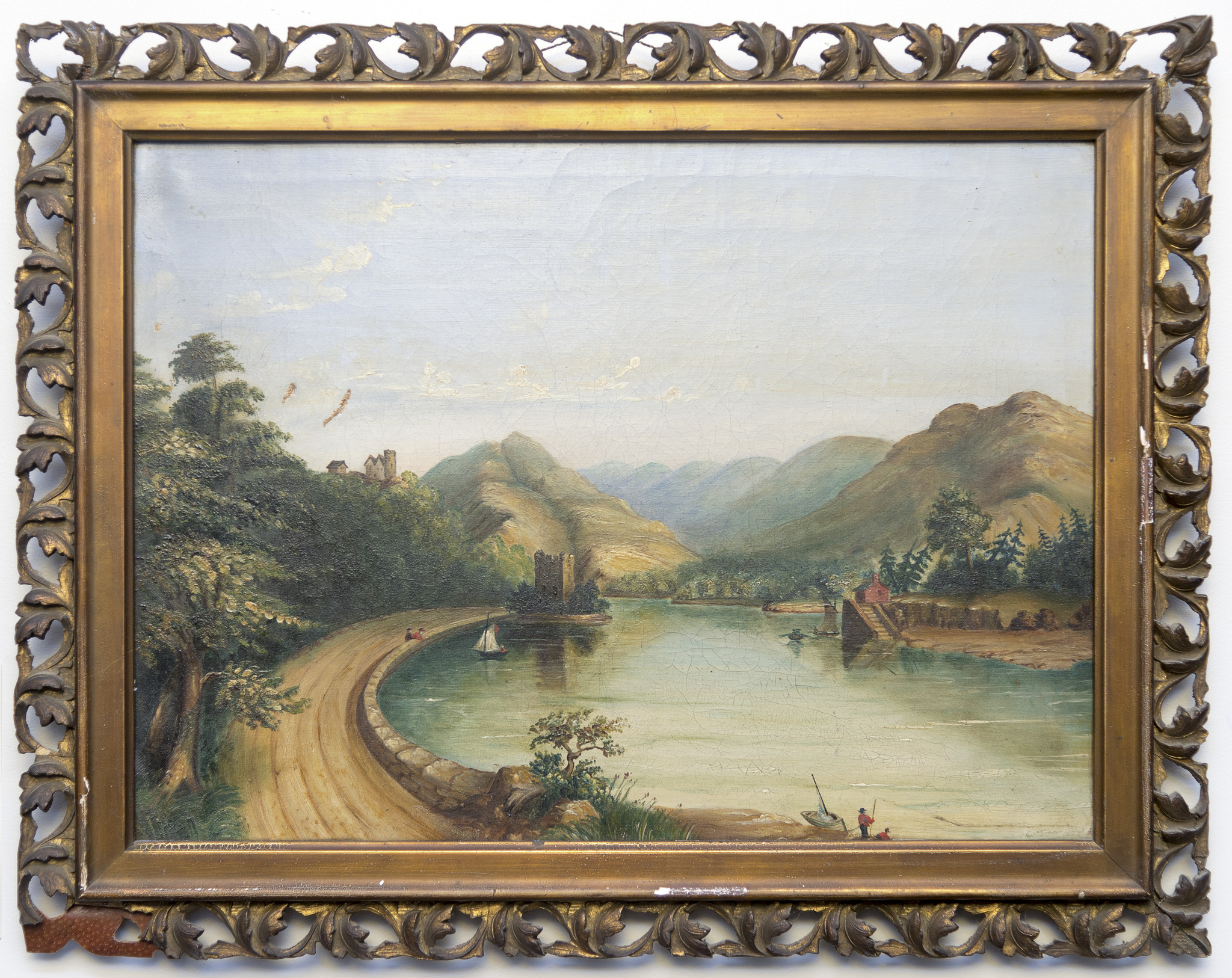 Narrow Water, Ireland. The earliest known painting attributed to W.A. Goodwin, depicting a famous castle adjacent to the Clanrye River in Northern Ireland. Dating to 1857, when Goodwin was seventeen years old, it was painted almost a decade after the family immigrated from the United Kingdom. Having never set foot in Northern Ireland, what inspired the adolescent Goodwin to paint this landmark remains a mystery. Oil on Board, original frame.

The earliest known paintings attributed to W.A. Goodwin date to 1857 and 1860, respectively – right around the same time he first arrived in Lindsay to work as an apprentice painter and decorator. Goodwin’s most prolific period, however, stretched from about 1880 through to the 1920s. It was during this time that he began to venture into the wilderness of Victoria and Haliburton Counties, exploring the rich tapestry of lakes and forests for which the region was becoming well-known. 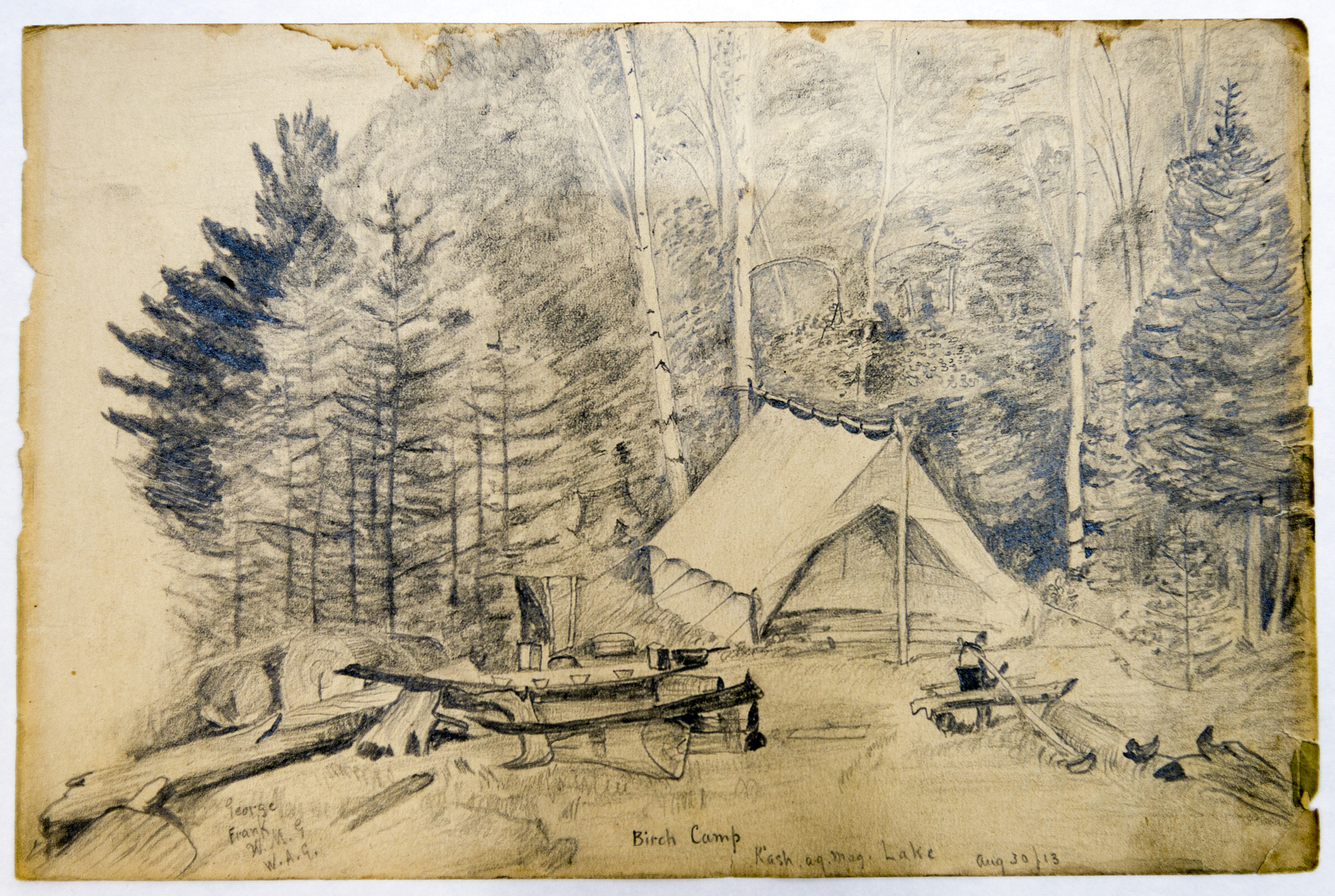 The most recurring theme in Goodwin’s artwork is recreational land use. Rustic campsites – complete with large canvas tents – are common, as are canoes, sailboats, and hunting expeditions. Signs of human activity abound, reflecting our desire to engage with the landscape in ways that benefit both its health and our own. 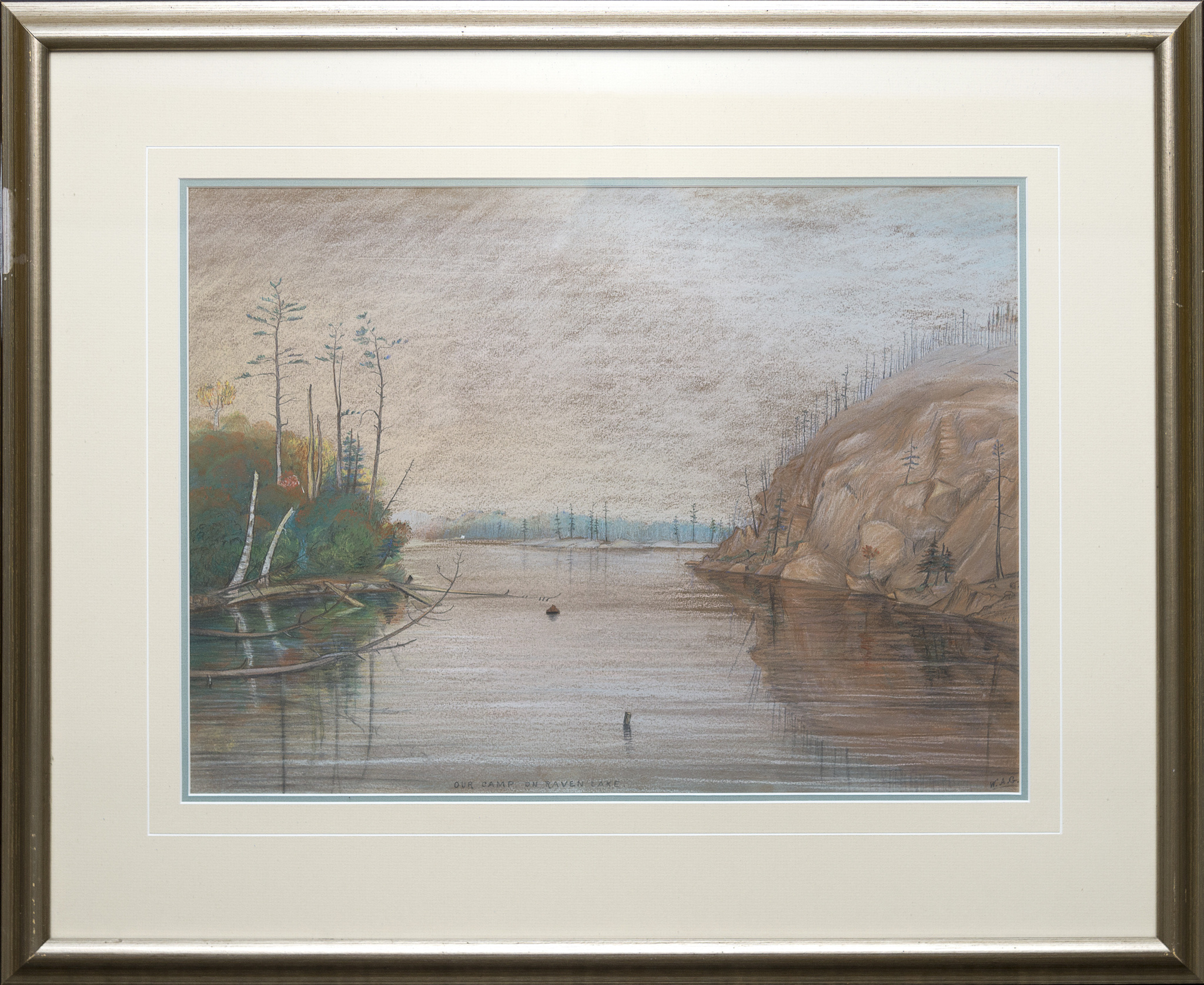 Our Camp On Raven Lake. Pastel on Paper.

In translating the beauty of the region on to a variety of surfaces, ranging from paper to fungus, W.A. Goodwin made use of multiple different media. Pencil sketches predominate, with watercolours, oil paintings, and the occasional pastel drawing following close behind. Some pencil sketches were later reworked into paintings, both oil and watercolour. 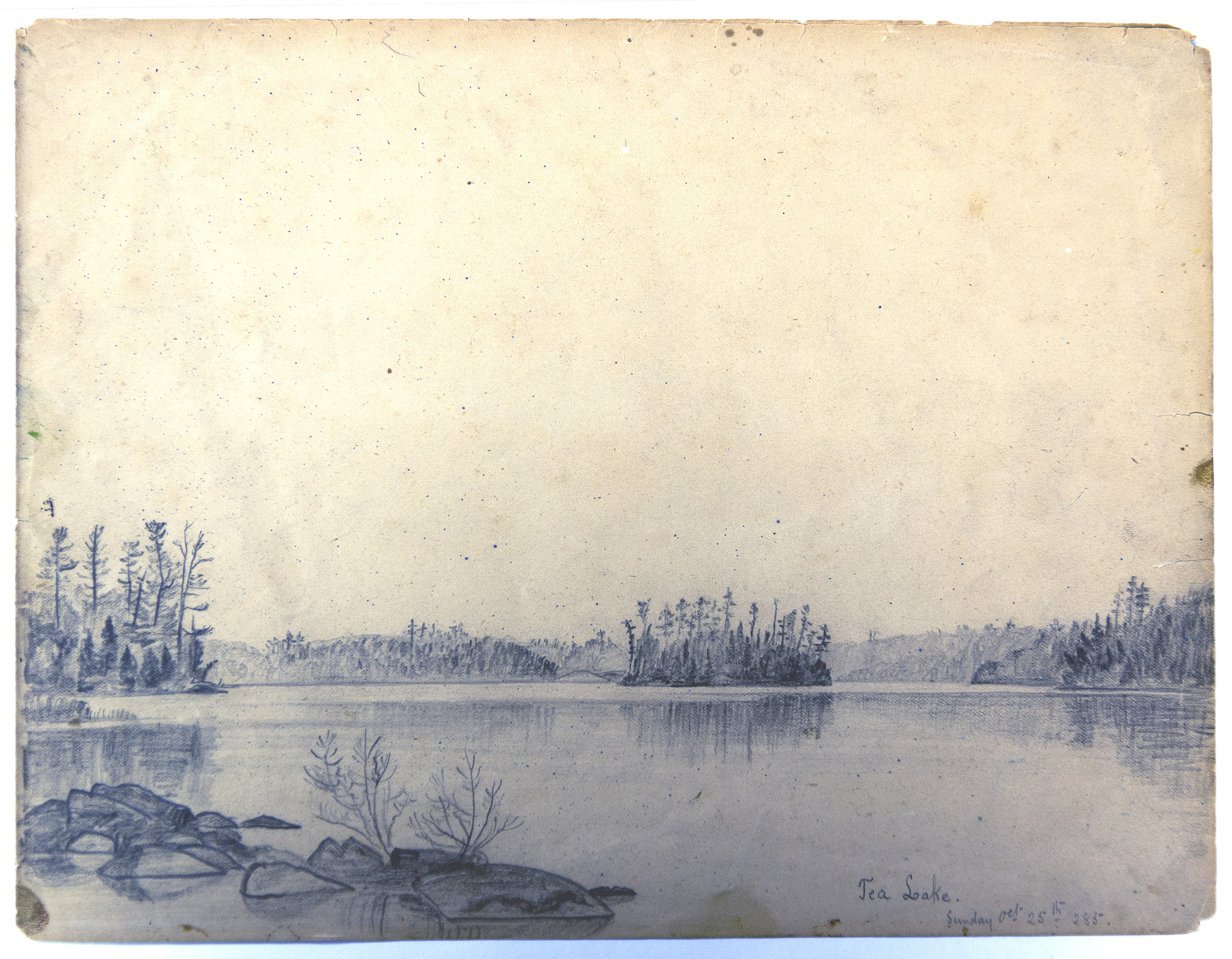 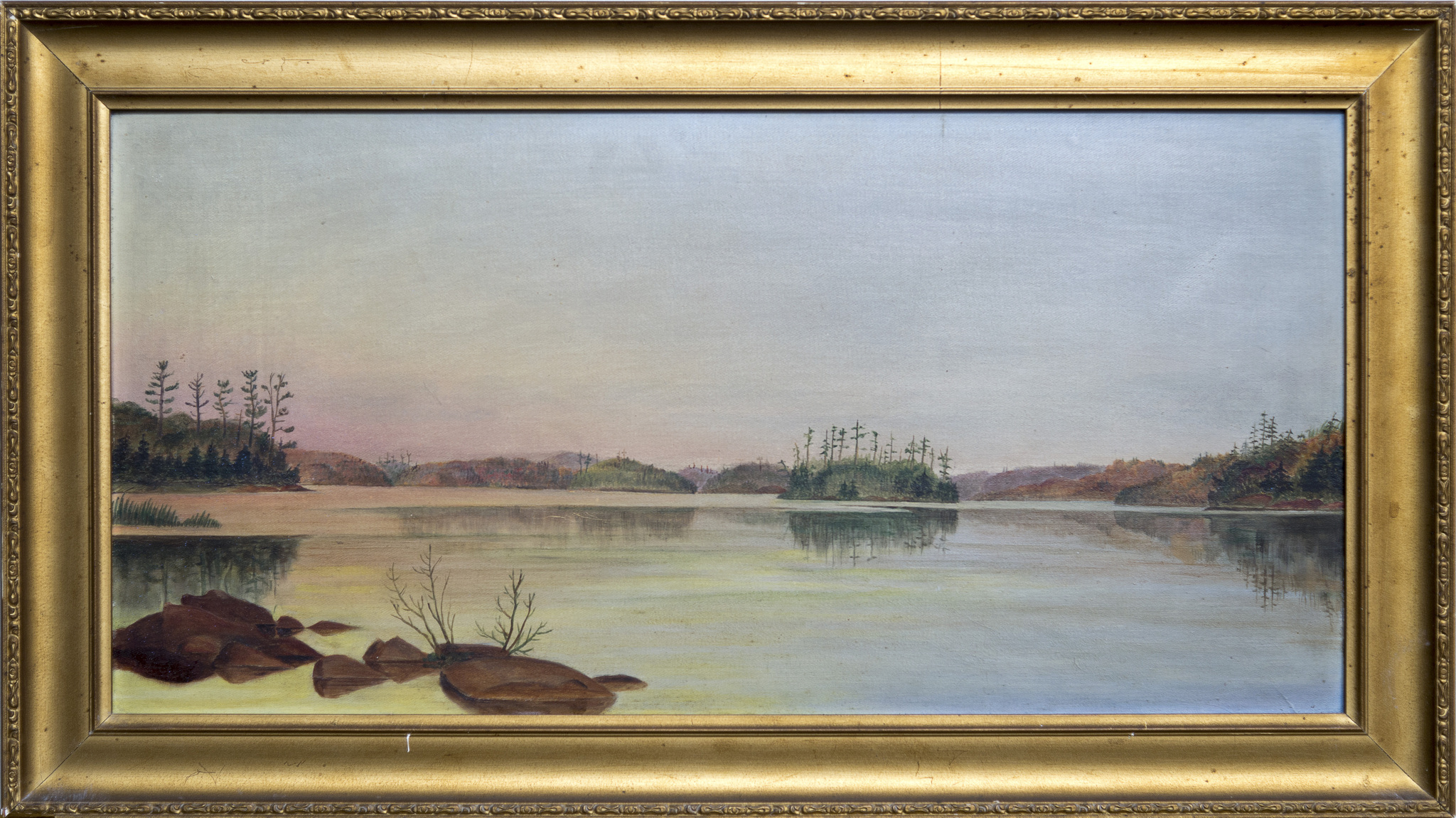 Still, Goodwin himself seems to have had a preference for painting, as an exchange with his youngest daughter reveals. “Most too hot for work so took a sheet of paper and made pencil Sketch of ‘Hide-a-way Cottage,’” he wrote in 1929. “Tillie says it is better than an oil painting, though I like the Colours best.”

“How I Found Health” W.A. Goodwin: The Outdoorsman