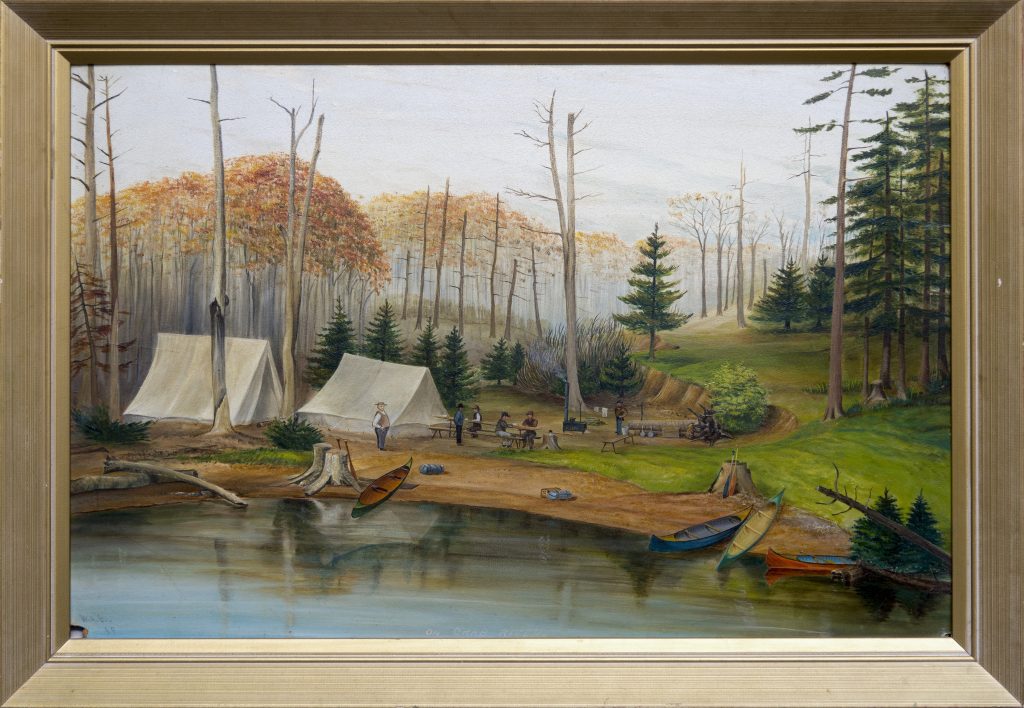 Our Camp On Crab River. The painting depicts a hunting party made up of T. Walters; A. Ross; Cap. Rose; Neil; C. Dando; Geo. Goodwin; and W.A. Goodwin. The hunters were rewarded with 10 deer; the trip being described in the May 1894 edition of Forest & Stream, a popular American magazine focused on hunting, fishing, and other outdoor activities. 1898. Oil on Board. Original frame.

Though his work required him to spend many hours inside Lindsay’s bedrooms and living rooms painting, Goodwin’s heart lay in the great outdoors, and he relished every opportunity he received to leave the hustle and bustle of town behind and head into the wilderness of Victoria and Haliburton Counties. 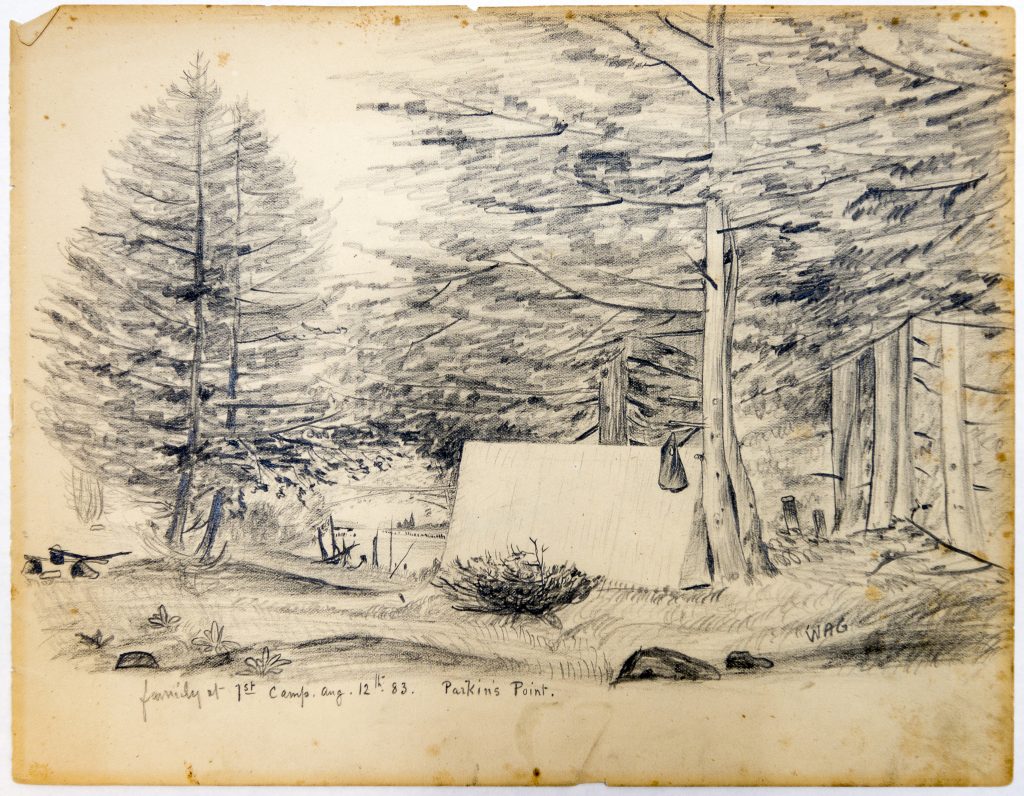 For decades, W.A. Goodwin paddled and portaged through the Kawartha Lakes. The most remote parts of the region were still accessible only by water. At sixty-nine, he packed up a flotilla of canoes with provisions to last a weekend and headed for Miner’s Bay in Gull Lake – some fifty kilometres north of his summer home on Sturgeon Lake in central Ontario. Joined by his sons and other members of the extended family, Goodwin meticulously recorded the journey in his journal:

All up before Sunrise. I had a dip in the Lake packed up and a good breakfast of porridge toast & French Eggs and away North before Seven. fresh head wind passed east of Delemayer’s Island and rested on Fire Island for 20 minutes. Made the portage at Coboconk at 9.30 sent cards to friends at Home and pushed on up stream to Little Mud Turtle lake.

While on the return trip, Goodwin noted that “…we found the channel into Big Mud Turtle blocked with 60000 Carew logs from Oxtongue for Lindsay” – a reminder of how the land and water Goodwin so enjoyed was being used for the extraction of natural resources. 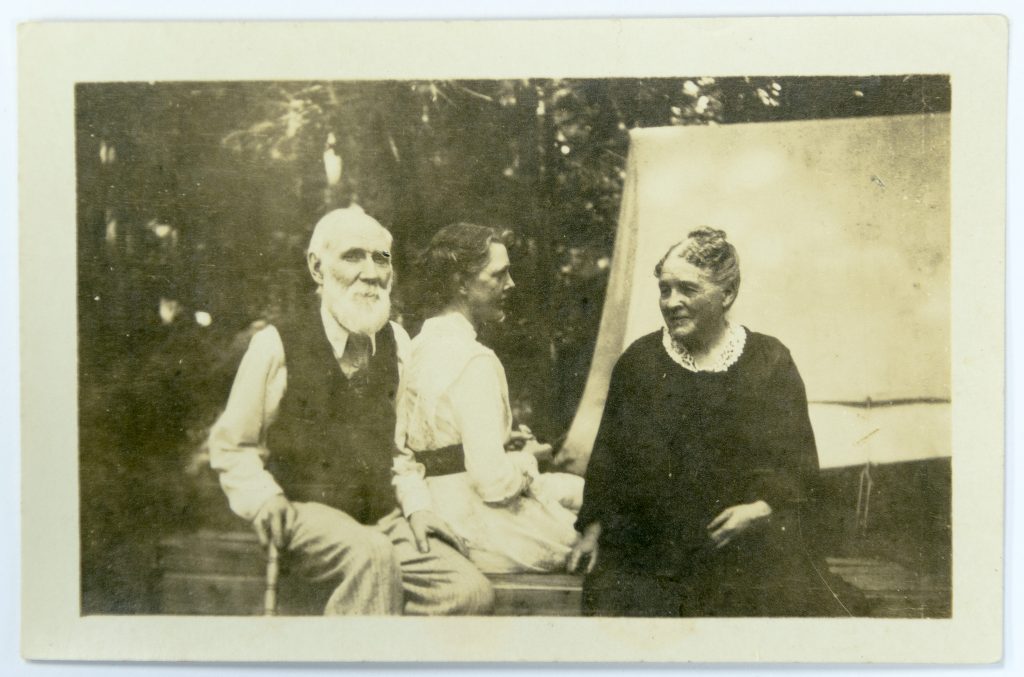 W.A. Goodwin, May Goodwin, and Emma Clements Goodwin enjoying the outdoors at Sturgeon Point, 1919. This was Emma’s last summer at the Point prior to her death in December 1919, aged 77. 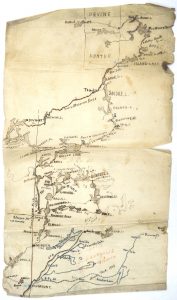 Despite his commitment to vegetarianism, Goodwin was also an avid hunter. For him, hunting represented yet another opportunity to enjoy nature in the company of family and friends. Many of his drawings and paintings from the last quarter of the 19th Century depict the various hunting camps to which he and his friends travelled in the late autumn. Those friends often included prominent citizens of Lindsay, such as Dr. DeGrassi, the coroner, and William Needler, a milling baron. 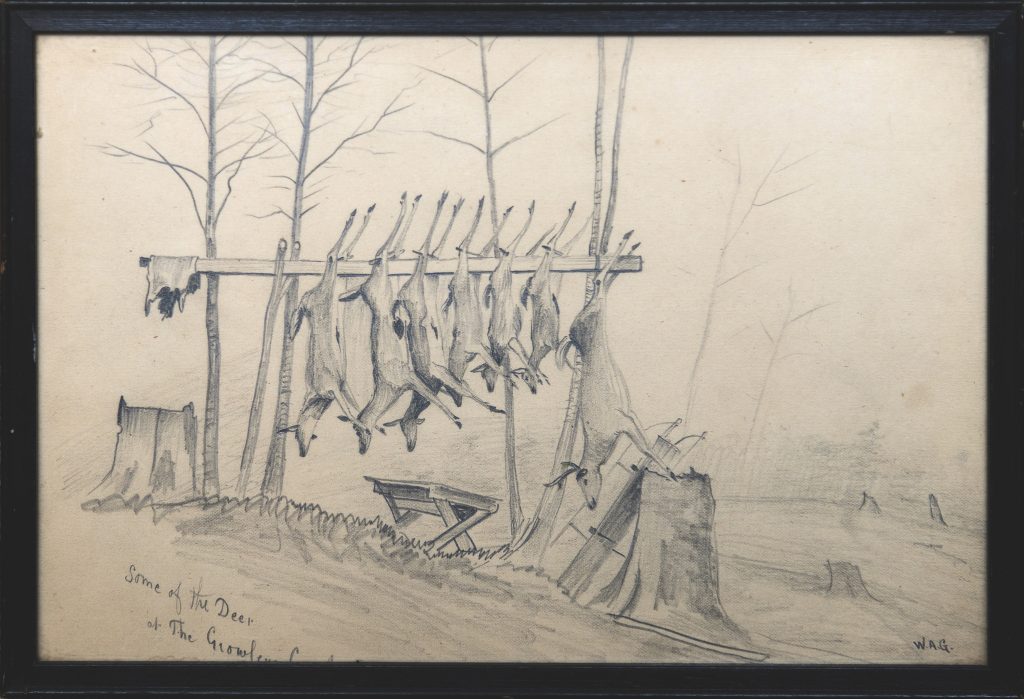 Some of the Deer at Growler’s Camp. Pencil.

As he aged, the robust Goodwin could be found sharing his passion for the outdoors with his grandchildren, taking long walks with them through the woods in search of fungi on which to paint or wildflowers to decorate his summer home. His granddaughter, Elsie, joined him for early morning canoe rides, and Goodwin was always ready to teach a younger generation basic canoeing skills.

After dinner our 15-Year old visitor from Pittsburgh was anxious to try his bathing suit, and a Canoe. finally I let him out alone in the lightest Canoe by Keeping near Shore he succeeded in a dozen trips up and down to get used to the canoe & paddle and did very well. 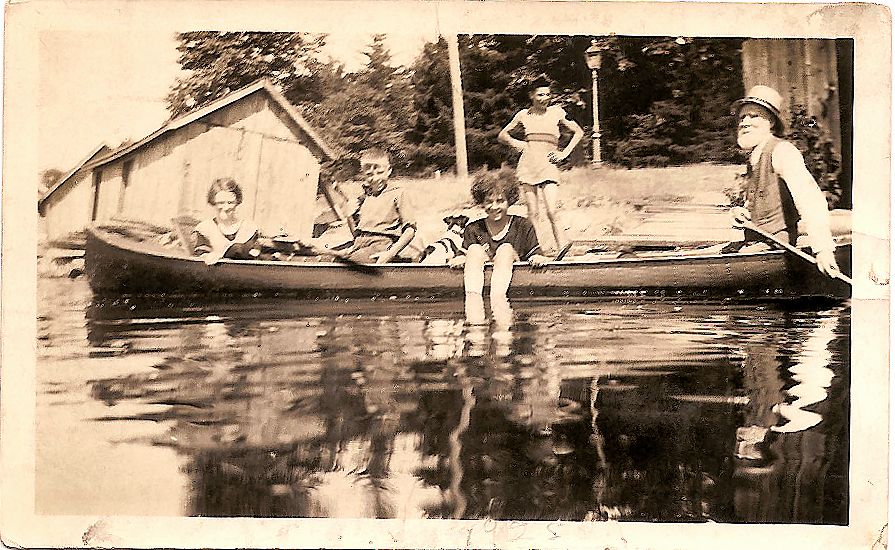 W.A. Goodwin paddling around boathouse at Sturgeon Point with grandchildren. No date.

W.A. Goodwin: The Artist The Kawartha Lakes: A Summer Playground