In the summertime, men came to the farm to lend a hand. They helped the Sisters with the heavy lifting, and the Sisters provided lodgings for the farmers’ families. Victorien Simard and his family lived in a house on Saint-Thomas farm. As for the Sainte-Marie farmhouse, it was occupied, at the time of purchase, by Mr. and Mrs. Henri Laberge and their little children. They lived there until 1956, when the house burned down.

For the heavy work, the farmers’ children and convent employees were all part of the labour force. Sometimes, groups of young pupils came to help with the potato harvest, like the orphans of the Saint-François-Régis Brothers. In addition to the agreed payment, the Sisters gave each child a chocolate bar and a stick of pulled sugar made by Sister Saint-Jacques (Simone Rochette).

The land was fertile. Having harvested over 1,800 bags of potatoes by hand in the summer of 1954, the Congregation decided to buy a potato planter and a harvester. There would no more manual potato harvest, no more blisters on the hands of the novices!

Wanting to make farming easier, the nuns modernised their machinery over the years: a poultry defeathering machine, two seed spreaders, a milking machine, and a combine-harvester. The farming implements were used on all the farms. The Congregation wanted to get the most of their acquisitions and employees. The cattle was also moved to better grazing fields.

The Sisters made large investments for the farm to be viable, comfortable for the animals, and for their work to be less arduous. They were pleased with their beautiful land. In 1943, the Congregation built a nice modern pigsty and henhouse on Sainte-Famille farm. 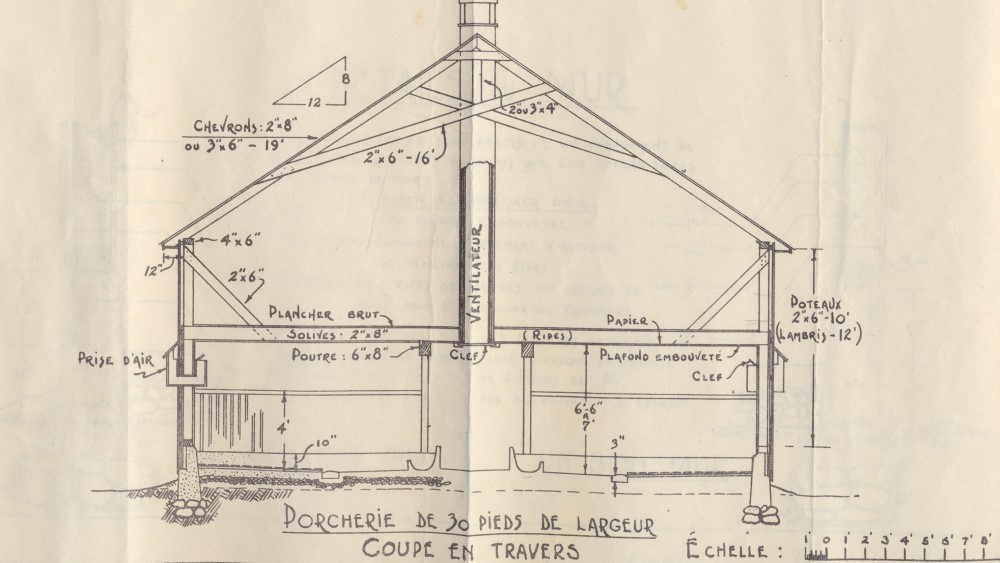 Plan of the Sainte-Famille farm pigsty, 1949.