The Sisters’ veritable agricultural adventure started in the early 1930s, when Reverend Eugène Grenon gave the Sisters a half-lot of land located ten minutes from the convent. What joy and agitation! Here was a new mission for them, who were more accustomed to chapel benches and schoolrooms. It gave the Congregation a great sense of purpose, but also a great challenge. 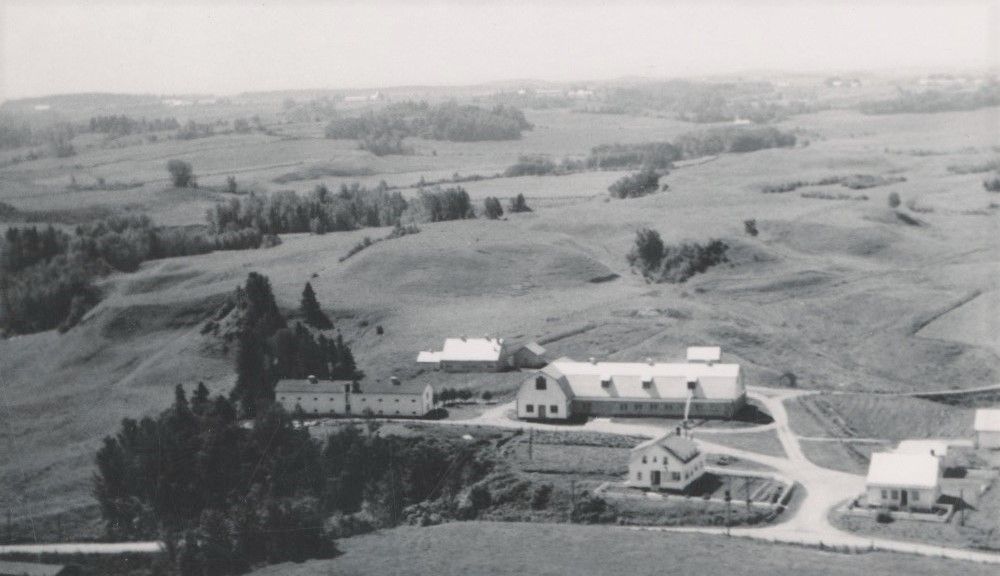 They soon understood the benefits of owning land. Two years later, they acquired the neighbouring farm, complete with buildings, animals, and a summer house. The Congregation got heavily invested in the project. From 1944 to 1950, they settled on Saint-Joseph farm: a house for the Sisters, a barn, henhouse, and pigsty. The operation went smoothly and the nuns took part in the work, helping the farmer from daybreak to dawn.

The Sisters’ house, to the right (white) and the farmer’s house, Mr. Simard, to the left, on Saint-Joseph farm around 1955. Beehives are seen in front of the white house.

In addition to the Rang Saint-Joseph farm, the Congregation started to work another farm in 1943, located on Rang Sainte-Famille in Saguenay. They were pleasantly surprised when Canon Arthur Gaudreault, Bagotville Parish Priest, offered it to them. The Sisters later acquired the neighbouring lands from Paul and Maurice Gauthier. The Sainte-Famille farm gave them a further 330 acres, and included the buildings, animals, and farm implements.

The ever-growing number of mouths to feed compelled the Congregation to acquire a lot of land. In 1955, the convent was home to 525 nuns as well as 300 boarders and school girls from their various schools (Practice School, Teacher-training School, and Family Institute). They purchased Sainte-Marie farm on Rang Saint-Joseph in 1954 and, a few years later, in 1959, Saint-Thomas farm, formerly owned by René Villeneuve. The three farms (Saint-Joseph, Sainte-Marie and Saint-Thomas) totalled 362 acres and were named collectively “Saint-Joseph farm”.

Locations of the farms owned by the Notre-Dame-du-Bon-Conseil Sisters.