The Sisters’ life at the farm is a mixture of religious obligations, farming, rest, and leisure. From 1954 on, five to eight Sisters are permanent residents on Saint-Joseph farm. They seem to be happy in their tiny community. They get many visitors, such as members of the General Council, or neighbouring parish priests dropping by for a cup of coffee or a game of cards. They also care for their sick Sisters, who can get the rest they need in the calm and quiet of the countryside.

Saint-Joseph farm is a meeting place for the entire Congregation. The Sisters live and work the land. The farm is also a place to rest and pray, as well as a place of gathering and celebration. 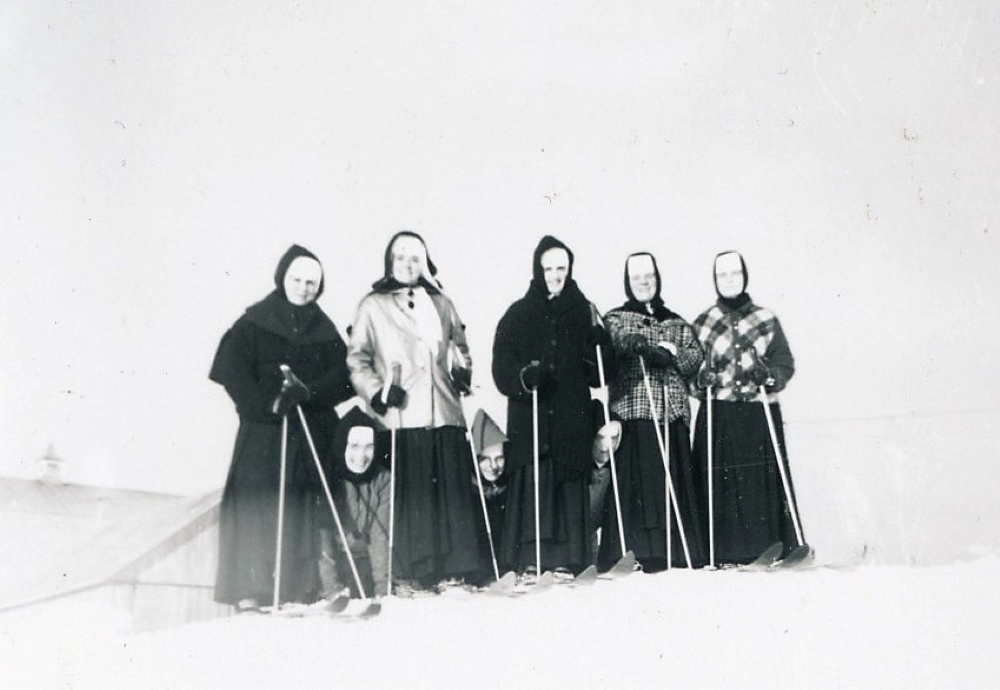 The Congregation’s General Council on skis, 1961. 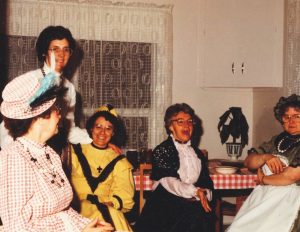 Every January, the Sisters residing at the farm hosted the General Council. They skied and ate copious meals around the table. In the wintertime, the entire Congregation was offered hospitality at Saint-Joseph farm, to celebrate the Carnival. The Sisters wore costumes, danced and sang.

In the summertime, the farm was a preferred location for fishing and corn roasts. The ever-so-famous corn roast was a celebration of fine harvests in the pleasant warmth of the final days of summer.

The Congregation, whose primary vocation was teaching, saw the educational potential of the farm for their charges. Young girls from the Household Management School and, later, the Family Institute, could learn the rudiments of agricultural occupations, such as weeding and animal care. They also followed beekeeping and poultry farming courses. The Chicoutimi Agricultural School used Saint-Joseph farm as hands-on training for their young farming students, who attended pig and calf slaughter, visited the gardens, and toured the potato and wheat fields.

Pupils of the Practice School were invited to a picnic at Saint-Joseph farm at the end of the school year. They played games, sang, made music, and enjoyed a wonderful day outdoors – a big morale boost for everyone.

From Trina to Fido… Winds of change!