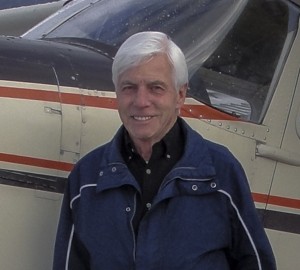 When the Silver Creek Fire first started, one of the head B.C. Forestry guys in Victoria called me and asked, “Were you once an Air Traffic Controller?”

He said, “You flew the fire patrol?”

He said, “We need a controller for the Silver Creek fire.”
I had to be on Workers’ Compensation so they offered to pay me $30/hour. 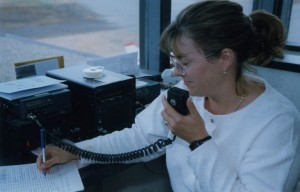 2. Forest District staff Carole Fillion filling in for fire duty. Carol tracked all helicopters in the air and on the ground.

My contact in Victoria sent a helicopter to pick me up at the Shuswap Lakes Estate Airport in  Blind Bay and flew me to a field in Silver Creek. I transferred  to another helicopter and landed at the Salmon Arm Airport.

I sat above all the action for half the day observing and making sure aircrafts didn’t run into each other. The next day I was on standby at the airport as the fire was slowing down and fewer aircraft and helicopters were in the air.

Weeks later a woman from Victoria phoned to ask where to send the cheque to?

I said, “There were so many people that lost their house and furniture, would you please donate what you owe me to them?”