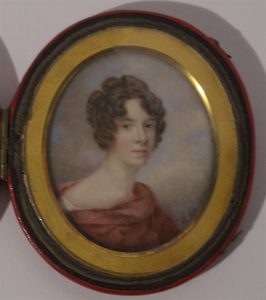 This image is of a self-miniature watercolour on ivory, by Anne Langton. The watercolour has a gold frame and is in a red compact. Used by permission of the Fenelon Museum Board.

This is the story of Anne Langton and her transformation from a privileged Englishwoman to a visionary – hardworking and faithful pioneer.  Her story illustrates her power to succeed in very harsh times.  Her own physical and psychological transformation even surprised herself as she documented it in her journal – “A Gentlewoman in Upper Canada.”

Anne was born in England to a family of means.  She accompanied her brother, John, as he travelled throughout Europe. As a young woman, she studied the fine art masters of Italy and beyond. Her art ability made her into a very skilled miniaturist painter. 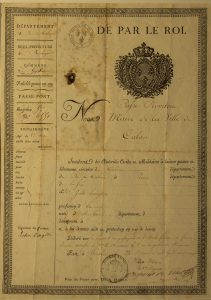 This is the original passport that John Langton used to immigrate to Upper Canada. Used by permission of the Fenelon Museum Board and City of Kawartha Lakes Archives.

In 1833, her brother John came to the colonies as a junior barrister. Anne later arrived at the age of 29, with her mother and her aunt Alice.  Anne’s faith and strength fortified her for the future she had begun. John would go on to become Prime Minister Sir John A. MacDonald’s first auditor general.

Their passage to Canada wasn’t easy because of illness. Arriving by ship at New York, they travelled north up the Humber River to Albany, through Utica to Syracuse. They then took a horse drawn railway car to Niagara Falls and crossed to the Canadian side by rowboat. Anne’s mother was terrified. They made their way to Queenston and then to Ottawa. A steam packet or ferry took them to Port Hope and on by stagecoach to Rice Lake.

John was waiting for them in Peterborough for the final leg of the trip to Sturgeon Lake by way of the Otonabee River. 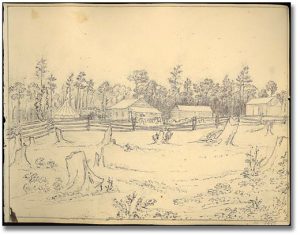 They then arrived by means of native canoe to Blythe Farm, their new home in the rugged Canadian wilderness. There Anne stayed until 1846 until she returned to England for a series of visits. Upon their arrival on Sturgeon Lake there were only four families north of them.