To better understand what these discoveries mean, we must sift through archival records related to the region under study. Rivière aux Outardes has been known for generations by Indigneous People, and from the 1700 by Europeans, who have noted it on their maps.

Jesuit Henri Nouvel is one of the first European to have described the North Shore territory and its inhabitants. In the beginning of the summer of 1664, Nouvel initiated a harsh travel inland to lake Manicouagan, joining a group of Innus. In the famous Relations des Jésuites, he relates his trek while describing the way of life and customs of the ancient Innus. 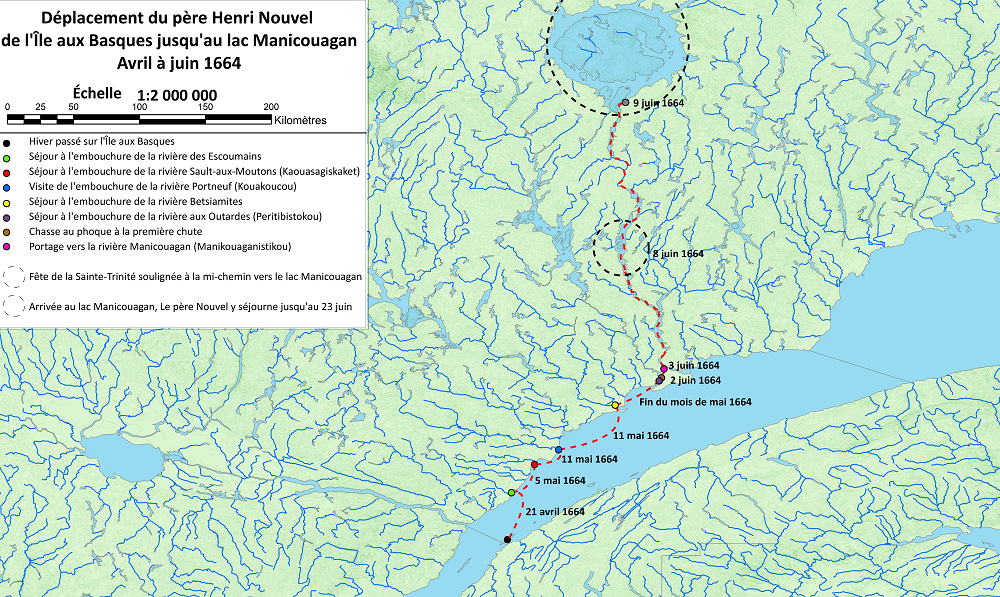 Having spent the previous winter at Île aux Basques with a group of Innus, Nouvel first moved to the mouth of Escoumins river to meet a group of Papinachois, a band of Innus living along the river of the same name, fishing salmon for a living. During the month of May of 1664, they moved from a river estuary to the other, eastward along the coast, sojourning a few days at every location. By the end of May, the group reached the mouth of aux Outardes River (Peritibistokou) and started travelling upstream on June the 2nd, aiming at Lake Manicouagan. At their departure, Nouvel observed a seal hunt at the river’s first falls, the hunters using spears, arrows and guns. The following day, they left aux Outardes Rived and portaged to Manicouagan River (Manikouaganistikou). The Jesuit and his Papinachois guides travelled for more than 250 km, paddling on the river or walking on a dozen portage trails. On the 9th of June 1664, the group finally reached the lake. On June the 23rd, they started their trek back to the coast, completing it in four days. After two more days of sailing on the St. Lawrence, Nouvel was back in Quebec city.

This type of chronicle is precious because it allows archaeologists to better understand their discoveries. Even though it does not directly describes Pointe-aux-Outardes, it reveals the type of economical activities that the Innus were carrying in the same region. The story describes a nomadic way of life, seeking aquatic resources seasonally. This lifestyle can easily be compared to the 2018 finds, interpreted as a seasonal encampment where a lot of marine resources were consumed.

2018 – The Dating of the Site Conclusion of the Digs