Have you ever wondered how archaeologists find a site? This question, asked by many, can be answered quite easily! 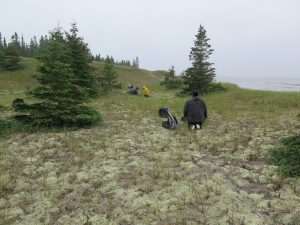 The team looking for a site on the shore of Rivière aux Outardes, 2016.

The Different Steps of an Archaeological Research

The archaeological process includes many steps, the first one being the localization of a promising area that will then be investigated by a survey. If a find is made, a dig might ensue, in order to reveal as many evidences as possible to help archaeologists in their understanding of the human populations that have preceded us. That is to say that archaeologists never happen to find by chance a lost treasure like we see quite too often in the movies!

At Parc nature de Pointe-aux-Outardes, the survey team did not have to look for a site for very long. The promising spots had already been pointed out by the finds of MM. Cardinal and Roger Dumont. When the project started in 2016, the team already knew where to look for! 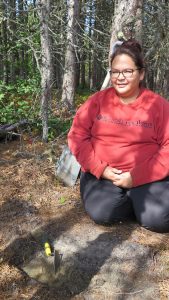 During this first step of the archaeological process, which is called a survey, archaeologists have tried to pinpoint the original provenience of the artifacts found by MM. Denis Cardinal and Roger Dumont. Equipped with gardener’s shovels and masonry trowels, volunteers, students, Innus and archaeologists dug 30cms square pits, called test pits. These could be more than a meter deep, where sand dunes had covered ancient occupation layers. Nonetheless, the majority of the artifacts that were found were laying at a depth of less than 50cm.

These pits were dug at an interval of ten meters, in order to cover the promising area as much as possible. If ever artifacts were found, the pits were dug at a closer interval, down to 3 meters from one another, as to evaluate more precisely the surroundings of the finds – this area thus becoming an archaeological site. The data now collected helped the archaeologists in their planning of a dig, which requires a much more detailed and intensive excavation.