“The natural wonders of Vancouver Island are apparent to even the most casual observer- the tall trees, the delicate wildflowers, and the abundant wildlife. But to the trained eye of Graham Beard the rocks themselves hold secrets mysterious and beautiful.”

This story introduces Vancouver Island and explains how the region is very important to people who study fossils.  It also introduces Graham Beard, a local retired teacher and amateur paleontologist. Graham has made several important fossil discoveries and has dedicated his life to educating the public about fossils. Finally, we introduce the ‘stars’ of the paleontology collection at the Qualicum Beach Museum.  We hope you enjoy this exhibit and that in the future you will come visit the museum to see these magnificent fossils up close.

This clip, featuring Graham Beard, talks about the history of paleontology on Vancouver Island.

It all started almost 100 years ago, when an unusual tooth was found in ancient shale rock on the Trent River near Campbell River.  Since then, discoveries by paleontologists have shown that the Island was home to a huge diversity of life forms in the water and on the land. 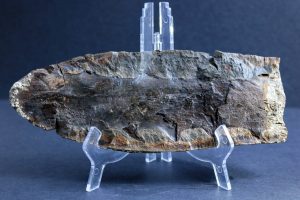 A fossilized palm frond in matrix.

A dazzling variety of fossils has been found on Vancouver Island and on the nearby Gulf Islands.  These include trilobites, ammonites, marine mammals, and many plants. Even tropical species existed on Vancouver Island in warmer prehistoric times. Paleontologists have discovered fossilized walnuts and palm fronds at a fossil site near Campbell River.

VANCOUVER ISLAND AND ‘THE RING OF FIRE’

To begin to understand fossils, we have to understand the massive movements of the earth that have happened over millions of years.

Vancouver Island is located in the Pacific ‘Ring of Fire’.  The Ring of Fire is a region in the Pacific Ocean that has a lot of volcanic and earthquake activity.  It might seem strange, but Vancouver Island and much of BC were formed very close to the tropical equator.  This is different from most of North America which is made up of rocks that are billions of years old. BC is made up of several different types of younger rocks.  These rocks were formed in the tropics and were moved northward over millions of years by plate tectonics.  This is why BC has different fossils than the rest of Canada.  Most of them were created under the ocean, which is why we find sea shells on the tops of mountains. 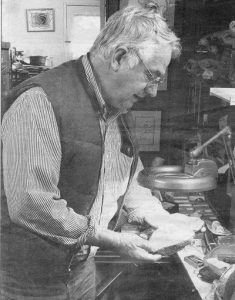 Graham Beard with his fossil collection, circa. 2005.

Graham Beard is a local amateur paleontologist and active community member.  He is also the curator of the fossil collection at the Qualicum Beach Museum.  Graham’s expertise at fossil-finding is well known.  Over the past 50 years he has been instrumental in the discovery of many significant Vancouver Island fossils.

Many of his fossils, and those found by other locals, have become valuable resources for research by paleontologists from around the world.

The QB museum has many fascinating fossils.   There is a giant spiral shaped sea creature called an ammonite that was found on a local mountain.  The collection also contains Vancouver Island’s only known trilobites and some very rare fossilized flowers.  We also have a display about ‘Rosie’- an Ice Age walrus who was found in Pleistocene clay north of Qualicum Beach.

Read on to learn more about young Graham Beard, the boy whose fascination with fossils became a life-long passion.  Find out more about the amazing Vancouver Island fossils discovered by Beard and his fellow amateur paleontologists.

Fossils: How do They Form?