Several years ago, a major fossil site was identified near Campbell River.  With great excitement, many amateur paleontologists converged on the site and began breaking apart concretions to look for fossils inside.  They found corals and large seeds.  But Graham Beard noticed something about the concretions: He could see they were full of much smaller plant fossils. He explained that breaking them could destroy these microfossils and lose this important information forever. 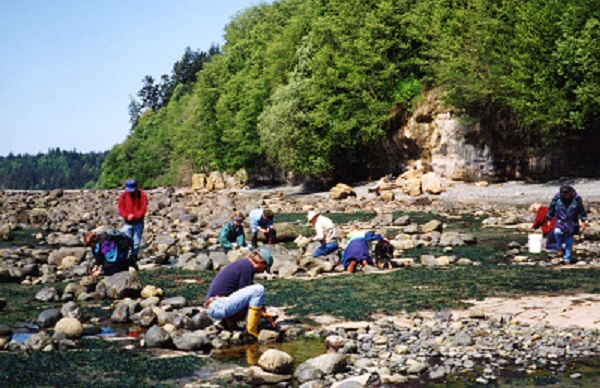 Amateur paleontologists fossil collecting near Victoria, looking for concretions much like the ones that contained Tinaflora beardiae.

Graham returned to the lab and applied a different technique, called cellulose acetate peel.  This brought the tiny fossils out of the rock. People had not seen these smaller fossils and had been unintentionally destroying them.

First, he cut the rock and smoothed its surface, then applied hydrochloric acid.  This process dissolved the carbonate rock, but left the cellulose skeleton of the fossils intact.  When the treated rocks were dry, a special plastic was rolled over them called cellulose acetate. When the cellulose was dry it could be peeled off.  The result was a layer of the fossil only a few microns thick. These slices of “plastic” could then be viewed under a microscope. In this way the vast array of incredible plant material was revealed.

PLANTS FROM A WARMER TIME

Graham and his colleagues learned a lot from the acetate peels.  They had first thought the fossils were from the Cretaceous period 70 million years ago. They were wrong.  In the Cretaceous, most of the plants were conifers and other gymnosperms.  The acetate peels helped them realise that these were much younger fossils.  How did they know? The fossils included flowering plants, also known as angiosperms. The flowers were from the Eocene epoch, only 56 million years ago.  This was a time when the climate was much warmer than it is today.

One of the fossilized flowers discovered in the Eocene concretions was studied in detail.  Using the cellulose peel method, the physical appearance and structure of the flowers was examined under a microscope.  By taking several sections of the fossil embedded rocks, a 3-D image could be created. The 3-D image helped scientists assign this newly discovered flower to the Laurel family (Lauraceae).

It is traditional to name a new species after the person who discovers the first specimen, so this honor was offered to Graham Beard.  He instead suggested naming it Tinaflora beardiae in honour of his wife Tina.