Kingdom Fungi is one of the oldest and largest groups of organisms on Earth.  They are often easy to miss because of their size and where they live. The same is true for fossilized fungi, so when they are discovered it is very exciting for paleontologists!

For much of their lifetime, fungi are tiny thread-like filaments of cells called hyphae.  We can only see these with a microscope. Fungi also have visible, or macroscopic, fruiting bodies such as mushrooms.  They do not have hard structures that turn into fossils, so you might think that fossil fungi would be impossible to find.  Think again!

FUNGI CAN BE FOSSILIZED

Thanks to permineralization, fossil casts of fungi can be formed when minerals are deposited in the cavities of soft tissues and cells.  In ancient rocks, scientists have found fossils of larger fruiting bodies. They even found microscopic chains of cells similar to those of present-day hyphae.  These fossils tell the story of fungi on earth as far back as the Devonian period.

Fungus fossils are a very rare find!  Only three fossilized species have been found on Vancouver Island.  They were found in concretions collected by Graham Beard from a site south of Campbell River. Paleontology researchers from the University of Alberta, Smith, Currah, and Stockey, took cellulose acetate peels of the concretions.

THE ONLY KNOWN EXAMPLE OF AN ENTIRE GENUS IS DISCOVERED

The concretions revealed beautifully preserved cellular structures.  These structures were of a remarkable specimen that was named Appianoporites vancouverensis.  A. vancouverensis is a fossil polypore, or bracket fungus.  It was remarkably similar to today’s bracket fungi.  This was an exciting discovery because it was the only known specimen of its genus.  The specimen is now housed at the Royal BC Museum in Victoria, B.C. 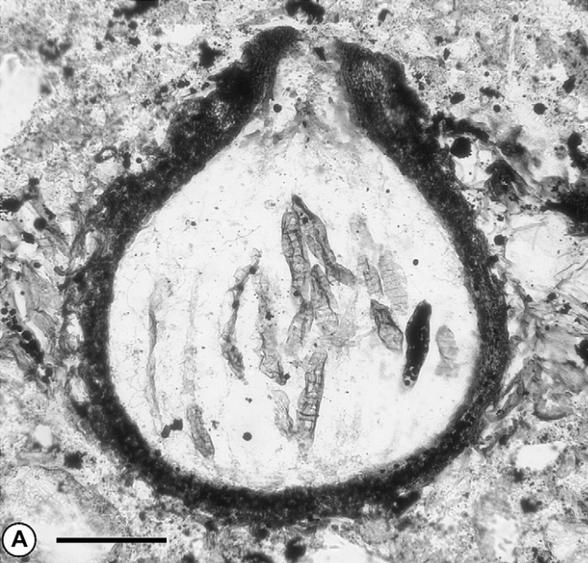 In 2007, the fossil of a mature, fungal fruiting body was discovered at the same site.  This single fruiting body, named Margaretbarromyces dictyosporus, had erupted from some plant bark. It was the first report in the fossil record of a fruiting body from an Eocene fungus that had lived and grown on bark.

A CLOSER LOOK AT M. DICTYOSPORUS

Like the cellulose acetate peels of A. vancouverensis, those of M. dictyosporus showed exquisite detail.  The fruiting body was only a few hundred micrometers in diameter and height.  It was very like those of some present-day fungi.  Within the pear-shaped structure were fragments of club-shaped sacs called asci that had contained spores.

It was not possible to identify the closest living fungal relative of M. dictyosporus.  However, the structure of the spores was similar  to those of a present-day group of sac fungi, the Dothidiomycetes.

What do we learn from finding this fossil in the Appian Way rock and within the fossilized plant bark?  This discovery helps us understand that fungi have been with us since ancient times. It also shows us that fungal-plant associations began to evolve during the Eocene.  They continue on until today.

NOTES:
*A micrometer, or micron, is a thousand times smaller than a millimeter.