“I’ve been interested in fossils ever since I was a kid going to elementary school… …I would collect rocks on the way to school.  My mother’s washing machine was full of dents from rocks I’d left in my pockets.”

From a very young age Graham Beard was fascinated by the wonders of natural history. As a boy in elementary school, Graham developed an interest in fossils that would become a lifelong passion. Graham has always been an avid collector. By the time he was 9 he had created his first “museum”—a room in his house with apple crate showcases and terrariums of snakes and an eccentric iguana.

DAD, I FOUND SOMETHING!

Graham started seriously collecting fossils when his father took him to the badlands of Alberta. Unlike today, in the 1950’s it was not illegal to remove fossils from Alberta. 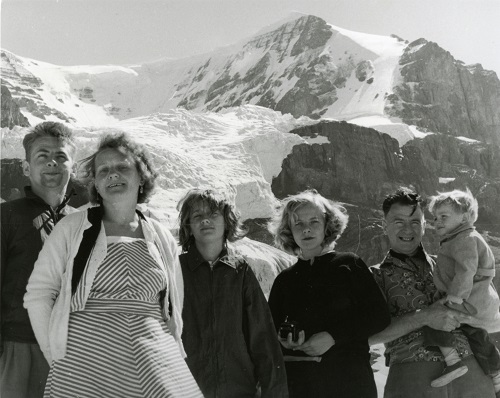 Graham Beard (on the far left) and his family at the Columbia Icefields, on their way to Alberta. c. 1959

“The most memorable fossil I can remember was when we went to Drumheller…and my dad and I went out collecting… …we found a piece of an Albertosaurus tooth. It was just a piece of the tooth but it was really large… …dad called me over and said what’s this? I went ballistic, he asked me what was wrong with me… I was so excited about finding that…”

The boy had fallen in love with paleontology, and knew he wanted to pursue this science as a career.

Graham studied at the University of British Columbia from 1961 to 1965. He obtained a Bachelor of Science with a double major in Zoology and Biology. One of his early mentors was Dr. Glenn Rouse.  He was a paleobotanist who studied ancient plants and pollens. Dr. Rouse was a great influence on Graham and taught him how to make rock peels for scientific study.  He took him to the Macobee Site at Cache Creek, which was rich in fossilized plants and animals from the Eocene age.

A DEDICATED TEACHER AND RESEARCHER OF PALEONTOLOGY

“Mr. Beard has a passion for science and for understanding the origins of life.  His teaching helps people have respect and wonder about the natural world. I know that’s how we felt as students of his.” 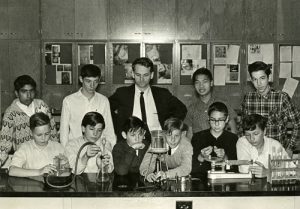 Graham Beard in his first year of teaching, with students from his science club. 1966

Graham went on to become a teacher at Kitsilano High School in Vancouver in 1966.  When he was offered a teaching job in Qualicum Beach in 1970, he knew that there were many unexplored fossil sites in the region.  This helped him decide to take the job. Graham raised his family in Qualicum Beach. He was a volunteer fire fighter, and taught hundreds of high school students over the years. His Biology and Earth Science students were inspired when he took them on fossil hunting field trips.

The science teacher’s lifelong passion for paleontology never faltered, and over the years he has collected over 20,000 fossils.  Graham has discovered many new plant and animal species. These include Tinaflora beardii, a species of flower named after Graham’s wife, Tina; and even a new genus of walnut.

These discoveries have provided important clues about how life evolved in this area.  They have put the area around Qualicum Beach on the map. It is a world class fossil site.  This attracts scientists and amateur paleontologists from all over the world to visit and learn from Graham’s vast collection, and to explore the area themselves. 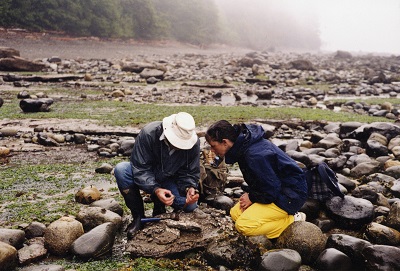 Graham out in the field, showing another amateur paleontologist the ropes. c. 1980

Graham enthusiastically shares his knowledge about science and nature with people of all ages and backgrounds- in the field, museum and classroom.  Graham and his colleague, Dr. Rolf Ludvigson, wrote a book called West Coast Fossils: A Guide to the Ancient Life of Vancouver Island.

Fossils and the Scale of Time Vancouver Island Trilobites