“Ammonites are the most common found fossil in the Oceanside area. These look like a large snail but they are actually related to the octopus family.” 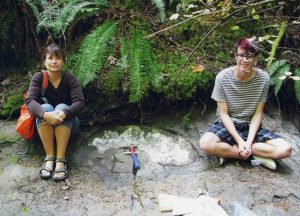 Hikers Elke and Enzo Wohlleben, who discovered the giant ammonite, 2012.

One day in 2012 Elke and Enzo Wohlleben were out for a hike on a Vancouver Island mountain. They were surprised to find themselves standing on a giant fossilized ammonite. The fossil was one meter wide! The hikers alerted local amateur paleontologist Graham Beard, who returned with Elke and Enzo to the site. He confirmed that they had made a very important discovery. 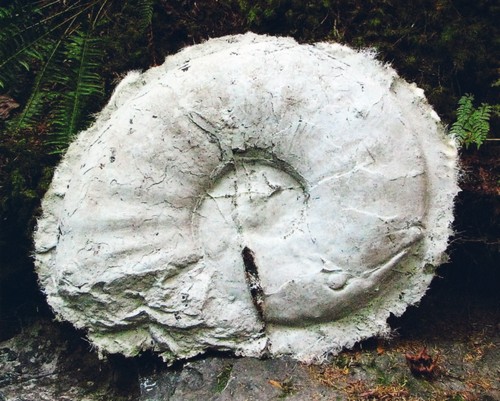 The fibreglass copy of the ammonite.

Now the challenge was to figure out how to share this discovery.  Removing the fossil could damage the incredible specimen. They decided to create a fibreglass cast of the giant mollusk, so they could leave the original fossil intact.  This was no small task! Creating the cast took a lot of effort. Also, the fibreglass compound had a really strong smell. After the cast was made, it took a day and a half to set.  The cast was very heavy and had to be carried back down the mountain. It now hangs in the Qualicum Beach Museum.

PREDATORS OF VARIOUS SHAPES AND SIZES 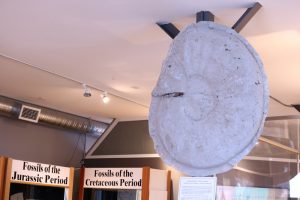 The cast of the giant ammonite displayed at the Qualicum Beach Museum.

Ammonites were aquatic creatures that went extinct 65 million years ago. The squid-like ammonites were hunters.  These top predators, also known as apex predators, had multi-chambered shells that were often in a coil like the present day nautilus.  Some ammonites, called heteromorphs, were uncoiled.  The ones known as baculites had shells that were nearly straight.  They mainly fed on small fish and crustaceans.  The ammonite would snare their prey with tentacles that extended from the shell, then devour it with their sharp, beak-like mouth parts.

SEA LIFE ON TOP OF A MOUNTAIN?

Finding a giant sea creature on top of a mountain may seem strange. What was it doing up there? Finding creatures such as ammonites far away from the present day ocean shows that sea levels have changed a lot over time. Plate tectonics also play a role in this, taking the flat ocean floor and pushing it upwards until it forms a large mountain.