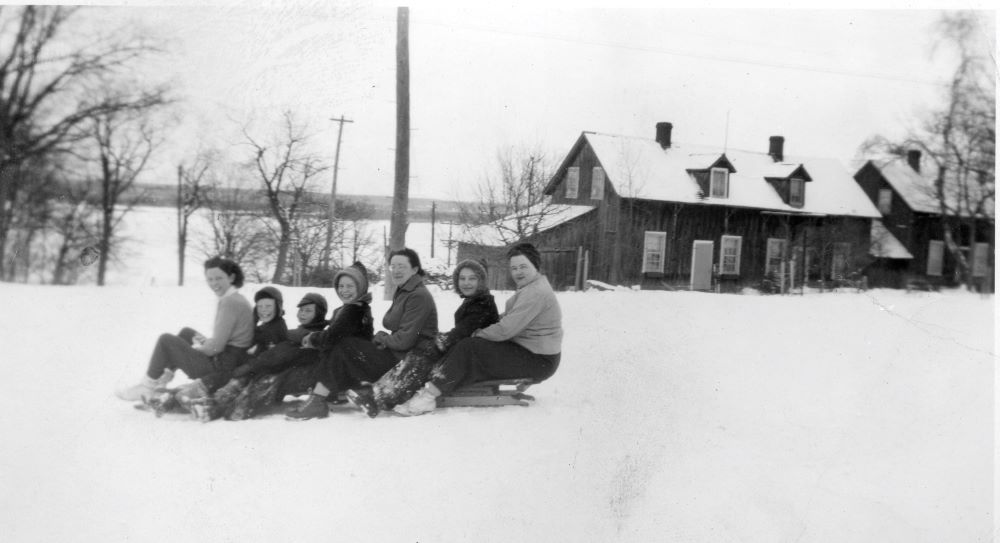 Gladys Desjardins (nee Blackburn) is at the back of the toboggan with unidentified women and children. This photograph was taken at the top of Arthur’s Hill, opposite the Braeside Inn, circa 1950.

KB: Do you remember the Orange Hall at all in Braeside?

PB: Yes I certainly do. We had some great dances there and they used to even have someone come that would be not a magician but he would advertise hair stuff and mouthwash and everything.

KB: So the Orange Hall obviously had religious and political views tied to it. Did it seem to be the type of place where everyone was welcome?

KB: Okay, how about the Braeside Inn?

PB: Oh, that was a great place too! Gladys and Clause Desjardins had it, well I’m sure there were people before them but I remember Clause and Gladys very well. And, when Hugh came up to see me, Clause had a taxi and for twenty five cents he would pick Hugh up and take him back to Arnprior. And Clause made money!

KB: Was the Braeside Inn sort of a social place as well?

PB: Yes, I can remember going to parties there.

KB: So the Gillies Mill was obviously a big part of the Village of Braeside. A lot of the residents worked there.

PB: It was the only industry there was.

KB: Was it mainly men that worked there or did any women work there as well?

PB: No, there wasn’t a woman at the mill. But then they had their office and there were women who worked in the office.

KB: And did you know any of the members of the Gillies family?

PB: Yes, but not until I was older. When I was young I didn’t know any of them.

PB: No, they lived right in the village. There’s still, you know, [the brown house]. Like it was there, I can remember it from being a small child. And I remember having Rheumatic fever and Mrs. J.S. Gillies kept bringing this white cake down, she called it a children’s Christmas cake and that was so good!

KB: So they were involved in the community then?

PB: Yes and that Mrs. Gillies gave all the kids in Braeside skis one year. That’s where I learned my love of skiing.

KB: So what other things did you do for recreation in Braeside?