Most so-called non-essential services were closed during the emergency. First and foremost were the banks. Without electricity, ATMs could not operate and stores could not accept debit and credit cards. This caused a great deal of alarm among the general public, with people having to make do with whatever cash they had on hand. Fortunately, some places like pharmacies accepted cheques. Some municipalities put a priority on making cash available to residents by providing local banks with generators. Later, the government offered $70 per person per week to help ice-storm victims. 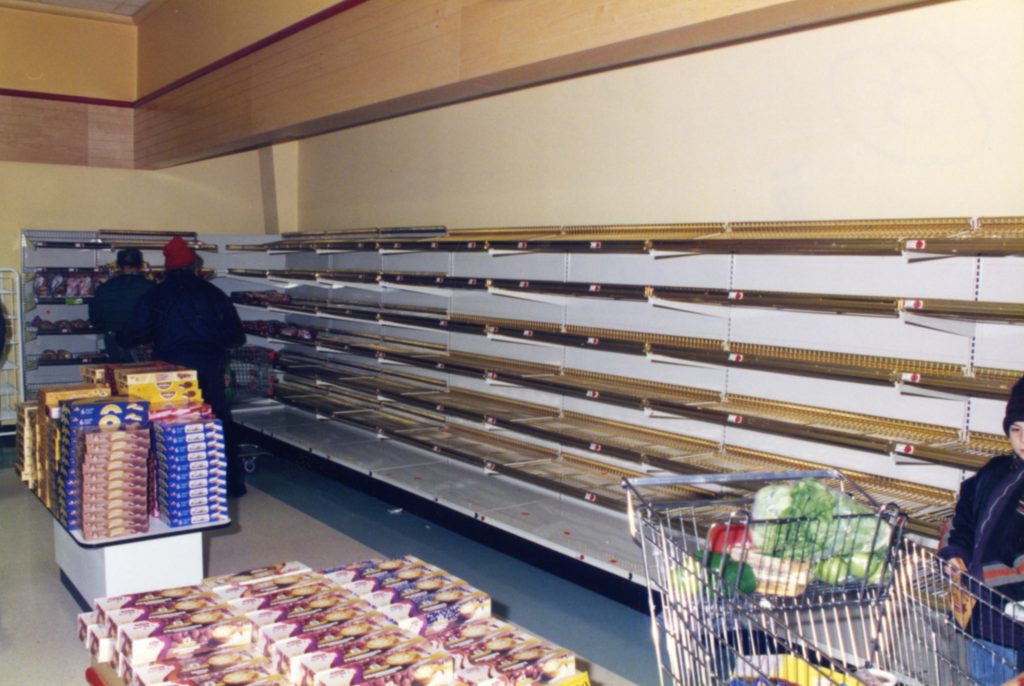 Most grocery stores managed to stay open, catering to the massive numbers of people wanting to buy food that did not have to be heated. The city of Saint-Jean-sur-Richelieu centralized the storage of all donated foodstuffs arriving from outside the region at Hangar 4 on the military base. Thanks to the remarkable work of 140 volunteers, people who had no cash could go there to get a food basket. In Saint-Cyprien-de-Napierville, the second floor of the town hall was converted into a temporary grocery store.

On the other hand, few restaurants remained open and those that did, like Chez Irène in Iberville and Le Relais and  Le Coq Rapide in Saint-Jean-sur-Richelieu, provided daily meals for the thousands of relief workers deployed to the region. All the region’s hotels displayed “No Vacancy” signs. The Hôtel Gouverneur, which housed nurses from the Saguenay, heated its floors on a rotating basis to give guests a modicum of comfort. The number of guests did not diminish until a few months afterwards, since many experts who came to survey the damage also stayed there. At the Crane plant, which was operating on three generators, employees were allowed to take a shower and had access to a small shop where they could get free food and lamp oil, among other things. In Saint-Luc, the owner of the Les Pétroles Maurice gas station and dépanneur transformed his car wash into showers for the municipality’s residents.

“Obviously, it was pretty unpleasant […], but on the human side, it was an enriching experience because […] when there is an ordeal to get through, people stay strong and work together.”

Gilles Dolbec, Mayor of Saint-Luc during the 1998 ice storm

Nature Turns on Itself When Everything is Cold and Dark: The Daily Lives of Ice-storm Victims