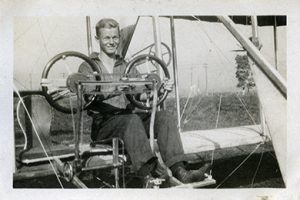 Roy in the solo flight position at Dayton, Ohio. 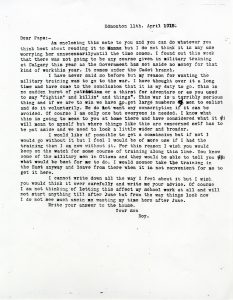 The first letter Roy wrote to his parents expressing a desire to go to war. Transcript included.

In 1915 Roy returned to Carleton Place and discussed his desire to become an aviator with his father. His father suggested joining the Royal Naval Air Service (RNAS), whose pilots had a relatively safe role flying patrols along the French and Belgian coasts, as opposed to the Royal Flying Corps (RFC) whose casualty statistics were beginning to mount at an alarming rate. Roy agreed and applied for an interview with the Director of the Royal Canadian Navy, who was taking applicants for the RNAS at Ottawa.

Roy was promised a commission in the RNAS if he could demonstrate an ability to fly an airplane by obtaining an International Aeronautic Federation Aviator’s Certificate at a flying school. 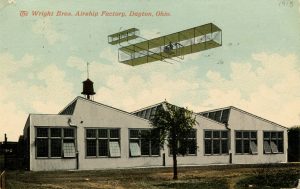 Postcard of the Wright brother’s airship factory in Dayton, Ohio.

The nearest flying school accepting students was the Wright School of Aviation at Dayton, Ohio. Roy, along with childhood friends Stearne Edwards, Murray Galbraith and Walter Sussan, applied at their own expense, and were accepted. Total costs at the school exceeded $600, quite a sum of money at the time. Students slept in the hangars, and meals were provided by local farmers. 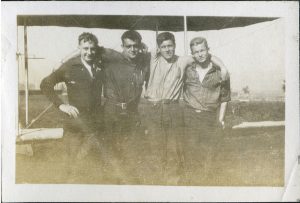 The “Hobo Quartet” in Dayton, Ohio, at the Wright School of Aviation.

The instructional method was rudimentary. An instructor would take a student airborne for a few minutes and then land. A brief discussion of the flight would then take place with other students grouped around the plane, and then the process was repeated. The only time the students flew solo was for their license exam.

The exam consisted of three solo flights totaling 40 minutes, and completing two figure eights. If one could take the machine into the air, fly around the field and land without killing oneself or destroying the aircraft, he was considered to have passed.

Roy obtained his Aero Club of America Certificate number 361 on November 13, 1915. He immediately returned to Ottawa and was enrolled in the RNAS as a temporary Probationary Flight Sub-Lieutenant.

Roy sailed for England on December 2, 1915 on the American Line ship the “SS Finland.” 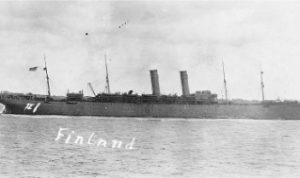 The “SS Finland” at anchor.