Numerous books and films have been produced in an attempt to reach the truth about Roy’s life and his encounter with Richthofen. Roy rarely spoke about his time in the First World War and most of the information learned about his experiences were gleaned from personal letters, official military reports, and anecdotes provided by friends and family. The fact that his story has continued to fascinate and intrigue people reinforces the belief that his was an unusual and extraordinary life.

There is some evidence to suggest that Roy may have influenced the creation of the legendary fictional spy character in Ian Fleming’s James Bond stories. After the war, Roy and Fleming both spent time in Southern Ontario at or near the military spy training centre known as Camp X, which was operated by Fleming’s good friend William Stephenson. Stephenson is better known as the spy “Intrepid” and was credited with having shot down the Red Baron’s brother, Luther. 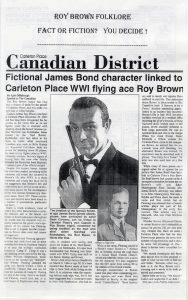 Newspaper article discussing the similarities between Roy and James Bond.

Connections to Roy also come into play when considering certain injuries and scars Bond was described as having in the original novel Casino Royale. These injuries are said to match war injuries that Roy suffered in his life.

Roy’s July 1918 near-death experience and rescue by friend Stearne Edwards is thought by some to be the inspiration for You Only Live Twice.

The strongest connection could be seen to be the name of James Bond’s secretary, Edna Moneypenny, which is very close to Roy’s wife’s name, Edythe Monypenny. Fleming was adamant that a Canadian actress play the part of Edna Moneypenny in the early Bond movies! 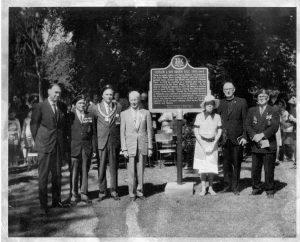 Roy never bragged about his achievements nor kept track of the number of aircraft he shot down. He was confident of his abilities, and of his men. He led them well, never losing a man in his flight. Even when crippled with battle fatigue and exhaustion he fought against the enemy, for he knew the men on the ground needed aerial protection to succeed. He undoubtedly shortened his life with his fierce determination to succeed as a fighter pilot and leader. It is exactly this determination that makes heroes of people. 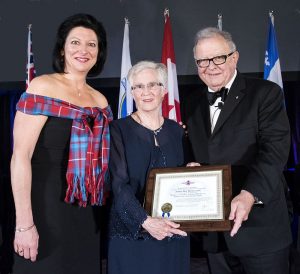 Roy’s legacy continues to live on across Canada. With the 100th anniversary of Roy’s encounter with Richthofen being marked on April 21st, 2018 a new generation of Canadians are beginning to learn his story. Institutions such as Canada’s Aviation Hall of Fame and the Royal Military Institution have permanent exhibits on his war career. The Royal Canadian Geographic Society has recently featured Roy in their documentary series A Nation Soars, which profiles the lives of Canadian airmen in the First World War.

Both Carleton Place and Stouffville, Ontario, have embraced Roy as a native son. Recently, both towns created monuments in his memory. In 2016, a plaque was erected in Stouffville at the site of his original grave. Roy’s home town of Carleton Place celebrates “Roy Brown Day” each June 4th. A large mural depicting the air battle with Richthofen was unveiled on the main street in 2012. Commemorative plaques about his life are located near the town’s cenotaph and at his birthplace. In 2017 Roy Brown Park will open, with thirty acres of public space that will include walking trails named in memory of Roy Brown and his fellow airmen.

This reluctant hero will not be forgotten. 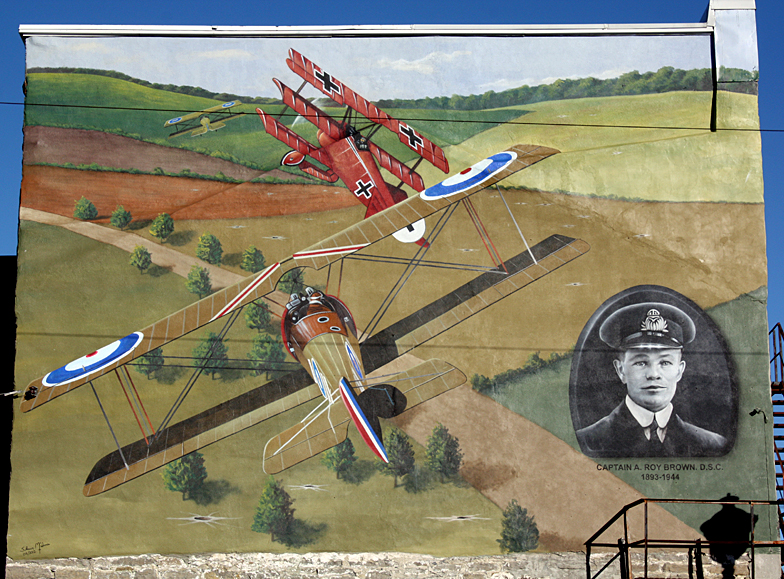 Life After the War The Reluctant Hero