The day of April 21st started out cold and foggy, but by 9 a.m. the weather cleared so both British and German aircrews warmed up their fighters: Camel BR1s for the British, and Fokker Dr.1 triplanes and Albatross D.Va’s for the Germans. 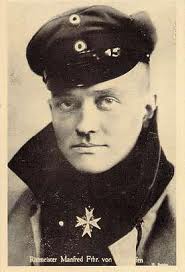 Roy spotted the Germans first and motioned for his fellow pilot “Wop” May to stay high and out of danger, as he was still inexperienced in battle. Roy then wobbled his wings, the signal for attack, and led the No. 209 Squadron down to the fight.

May remained at 12,000 feet and circled as instructed. When an enemy machine flew by underneath him he let it go, obeying instructions. But when a second aircraft appeared, piloted by none other than Richthofen’s cousin Wolfram, he attacked. Being inexperienced, May fired at his enemy without interruption, causing both his guns to jam. (Experienced pilots fire their guns in short bursts, allowing the guns to cool between bursts and thus lessening the chance of the guns jamming.) By this time, May and Wolfram were in the middle of the dogfight. Realizing he was in desperate straits, May wisely broke off and headed for Allied lines.

But Richthofen had spotted May as the pilot who had fired on his cousin Wolfram. He tracked May as he left the melee and followed him. Roy saw that May was in trouble so he disengaged from the dogfight and dove on the enemy from behind. Pulling out of the dive, Roy fired a long burst at the red Fokker and then lost sight of it. Believing that he had downed the enemy aircraft, he broke off and went to the assistance of another pilot. At this point Richthofen was at low altitude over Allied territory and began to take ground fire from Australian and British troops. His aircraft wobbled and nosed into the ground.

The aircraft lay in the field for hours, subjected to artillery fire, until Australian soldiers pulled Richthofen’s body across a road to safety.

After many official inquiries, reports and on-site medical examinations, Roy was officially credited with downing the German ace.

Four days later, Roy was medically grounded and admitted to hospital suffering from severe gastritis and extreme exhaustion. The gastritis was probably exasperated by inhaling large amounts of castor oil, a natural laxative that was also the primary lubricant for plane engines in the First World War. He was ordered back to England to recover and on June 1st, was recommended for a bar to his Distinguished Service Cross “…for conspicuous gallantry and devotion to duty.” 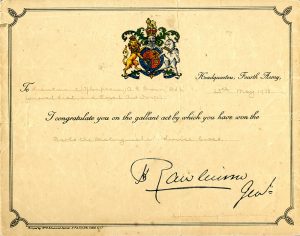