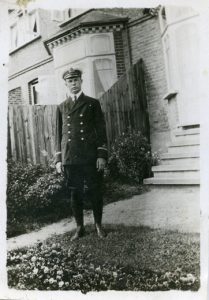 Roy shortly after his arrival at Chingford, England.

When Roy arrived in England he joined his friend Stearne Edwards at the training establishment at Chingford, England. There he trained on Maurice Farman S7’s, Avro 500’s and BE2c’s, learning military flying and bomb dropping. On April 6, 1916, he had his first serious crash. It initially appeared that he escaped unscathed but it was discovered the next day that he had broken a vertebra. Roy was invalided until August 1916, when he resumed his training.

Letter from Roy to his mother. Transcript included.

In March of 1917, Roy was ready for active service and was appointed to No. 9 Naval Squadron, flying patrols along the Belgian coast in Sopwith Pups. His squadron’s chief task was the defense of the North Sea fleet. Three missions later he crashed on landing, re-injuring his back, and was sent back to England to recover.

In June Roy was transferred to No. 11 Naval Squadron. On July 17th he opened his aerial score, bringing down a much superior Albatross DIII while leading a flight of Sopwith Pups.[1] His commanding officer promoted him to Acting Flight Lieutenant, a two-rank jump, on July 18th.

The No. 11 Squadron was disbanded in mid-August and he returned to No. 9, equipped with the Sopwith Camel. He scored his fifth victory on October 13, 1917, thus becoming what is known as an “ace” pilot.

His superiors now rated him as a “…very good flight leader and fearless pilot, with good ability to command.” Roy was awarded a Distinguished Service Cross (DSC) in recognition of his aerial successes and in particular for coming to the aid of a lone allied pilot under fire from four German aircraft. Even though his own guns had jammed he raced to the pilot’s aid, forcing the German aircraft to scatter as he flew directly through them. It was a remarkable act of courage.

Like many First World War pilots, Roy preferred to think he was destroying machines, not killing men. He worried about his comrades and he suffered when they were lost. However, he never lost a pilot from a flight that he commanded. 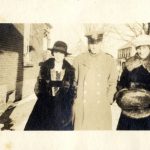 Roy, with his cousin Alice Pickup and an unknown woman, outside his home in Carleton Place, December 1917.

During the German offensive of March 1918, Roy was flying at least two combat missions a day as well as training novice pilots placed under his charge. The strain of sustained combat was beginning to affect him. Colonel Raymond Collishaw, Brown’s commanding officer, noted during an April visit that Roy looked exhausted; he had lost 25 pounds and his hair was turning grey. He was twenty-five years old. 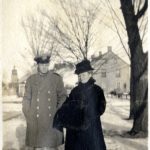 Roy with his mother outside their home on Judson Street, Carleton Place, December 1917.

Flying an increasing number of high-tension missions each day, Roy scored kills on April 11th and 12th in the Somme region. This brought his tally to nine. His tenth and final success came some nine days later on the morning of April 21, 1918.

[1] A “flight” is a subdivision of an air squadron, a group of three or four aircraft under a single command.