View this film, Rise of Flight: Death of the Red Baron (silent) with descriptive transcript.

Controversy has been a part of the story since the day Richthofen was shot down. In the heat of battle, it is hard to know exactly who made the fateful shot that killed the famous Red Baron. Many have claimed credit since the fateful day of April 21, 1918, and all have their detractors and supporters. The principal claimants are:

An unknown Soldier with a Lee-Enfield .303 who could have fired the fatal shot in the rain of bullets fired at von Richthofen.

All these men were part of history. Roy’s role was equally as important as Richthofen’s. Lieutenant Wilfred May, merely an unwitting lure for Richthofen, also had his part to play in this very real drama. What cannot be agreed upon and possibly never will, is the question of who played the leading role. Who really fired the bullet that killed the Red Baron?

The answer to this is not as important as recognizing all of these men as the heroes they were; involved in the day-to-day, month-to-month and year-to-year horrors of the worst war the world had ever seen. 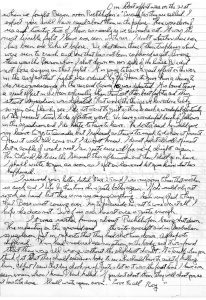 Letter from Roy to his father in which he discusses his encounter with Richthofen.

Regardless of the various opinions held, after several official enquiries, and with evidence from the medical examination done in the field, Roy was, and still is officially credited with the downing of Richthofen. 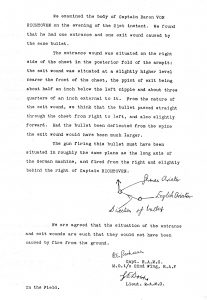