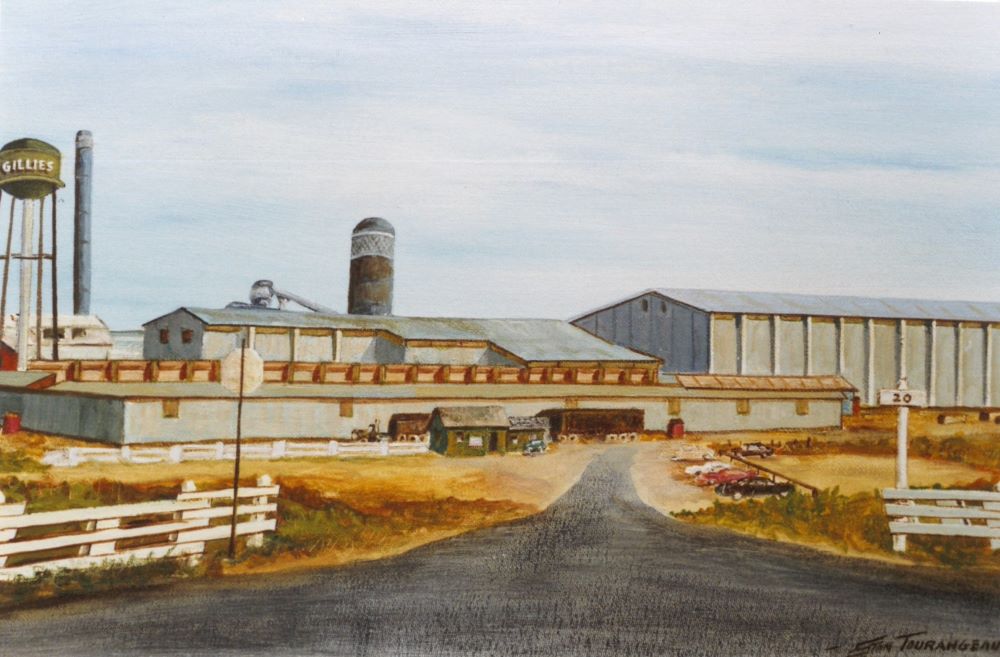 Painting by Stan Tourangeau (1917-1996) of Gillies Mill printed on note card, circa 1970. Note that the artist painted the Gillies name on the water tower instead of the logo of Consolidated Bathurst.

EC: So, when you were there, were they still running the logs down the river using people or were they using the boat or trains? I guess what I’m trying to get at is how were they exporting the wood from the cutting area down to Gillies.

WC: When I first got there and for quite a few years after, the logs came down the river. They came down in booms. The tug boats brought them down. They came mostly from Mattawa. That’s where the Gillies limits were, in Mattawa, and they just dumped them in the river and they’d come dome down the river and they’d collect them up by Portage, at Snow Boom. The logs would come and they’d collect them in booms and they’d bring them down. And they’d have to bring down bunches of them in booms. You’d run through enough in the old debarker, like I say it was further away from the other buildings, and then you’d collect them all on shore. Then all winter, they’d dump them back in again. They put them on shore and they put sprinklers on every pile to keep them from drying out. So you’d see these massive piles of logs, all summer, with sprinklers on top. And then in the winter they’d dump them back into the river ‘cause there was another, it’s called a jack ladder, it pulls the logs up out of the river. They’d dump them back in there and then they’d bring them back out, one at a time again to be sawed. They’d come up a jack ladder into the big saws at the saw mill, it was also on the river, and they’d store them all. Then they made them stop bringing them down the river and that was the beginning of the end of Gillies.

EC: Right. I have heard that in a few interviews. I believe Sloan Watters said that.

WC: That was the beginning of the end. They started to have to bring them all by truck and it wasn’t worth it.

EC: Not as cost efficient.

WC: Not as cost efficient as just floating them down the river, didn’t barely cost anything. To bring down a whole boom of logs, there was I think two guys on the tug boat. They had to start bringing them all by truck and it just wasn’t as cost efficient. There was no logs left around here and they started to try and purchase logs from New York. They were more money and less quality.