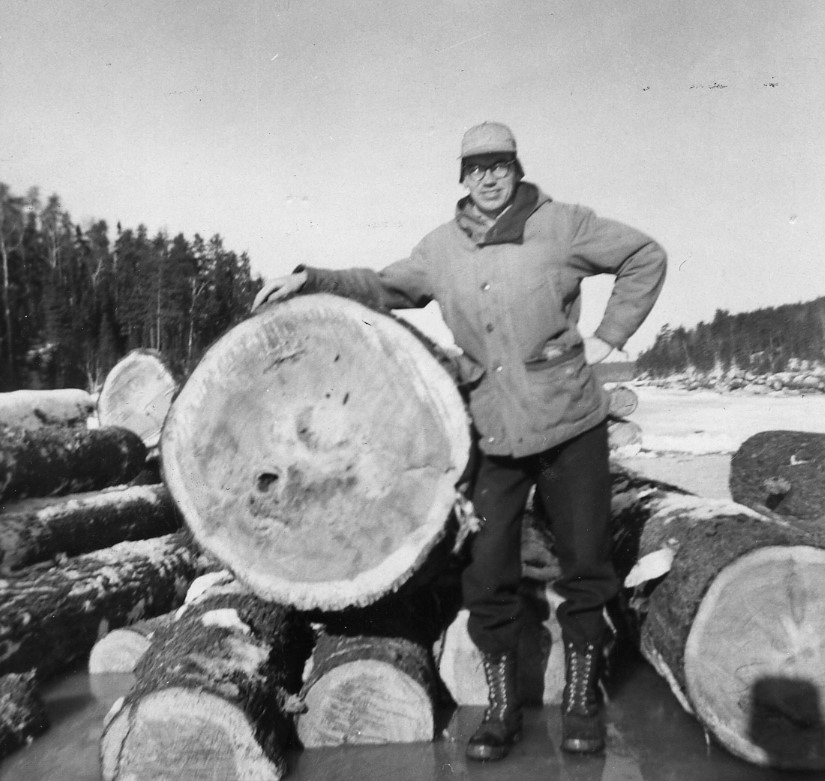 Sloan Watters poses beside a large log at Temagami, circa 1957.

Sloan Watters worked for Gillies Bros. lumber company from the time he was twenty in 1947, until his retirement in 1991. He started work as a truck driver in Temagami and later became a log scaler, time keeper, pay master, depot clerk and office manager.

SW: Well I started in April 1947. I was 20 years old. I had been doing a lot of other work before that. Prospecting away in North Quebec. Working in the mines in Timmins, and working on a forestry tower a way back in the bush watching for forest fires one summer. And I did guiding for hunters and fishermen and then I got driving a truck. Gillies were starting to build the lumberyard, to drive the lumber at the saw mill, so they wanted a truck driver and somebody contacted me so I went out and started driving the truck for them and that’s where it started. And after the yard was finished they put me on a job as a stores clerk and then the time keeper, keeping track of all the men around the mill.

LD: And this was at Temagami?

SW: Temagami the saw mill. Had to go around twice a day, morning and afternoon and check every man on the job and make sure he was there. And then I got a job as pay master after that. And then I got doing what was called a depot clerk for the camps. Who looks after, the depot clerk looked after a lot of the provisions and rigging and wages and time keeping and everything for the men in the woods. I enjoyed it very much when I got connected to the men in the logging camps. They were very interesting. We used to start off a season for the camps in July. We had to write up a list of all the provisions, rigging, and fodder, Gillies called all the feed for the horses “fodder.” That’s an old name, I guess. That’s what we used all the time in all the books. We had to figure that out for 2 logging camps and have it all ready for 1st of September, and it would have to last until March 31st. We had to figure to use estimating provisions per man per day down to 3 decimal points. If the cooks cooperated it worked very good. That was quite a system, and that food was very healthy for hard working men, all figured out in Braeside. I understand that it was Frank Bronskill, the original secretary treasure that worked on that along with D.A.

All these provisions and rigging were bought and delivered to the depot at the mill by Mid-August. We used to buy a box car full of oats from Winnipeg from James Richardson and Son and they were seed oats. That’s how well Gillies looked after the horses in the Temagami district. Same thing with hay, when we bought hay for the camps, they came with 144 lbs bales with haywire, and that haywire was one of the handiest things we had around the camps and the sawmill. Haywire is disappeared now, you don’t see it anymore but it was all over the place and that hay would be the finest Timothy and Alfalfa that we could get our hands on. We also bought a full box car of potatoes from Prince Edward Island, same time brought it in. The beef would come in as needed. We bought it by the side, in box cars came from Canada’s Packers from Toronto. It was quite a job to get all that food in and delivered and all set and raring to go in September because D.A. wanted the camps operating 1st September. He used to say he wanted 100 saw logs made the 1st of September in each camp. “Get it going and get it started.”