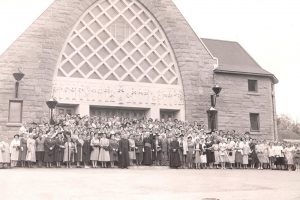 Gathering of Fermières from the Fédération des Laurentides (16)

“That was a far cry from the 132 members we have today,” thinks Alice. The organization got off to a successful start: only a few months later, there were 110 Fermières. In 1924, the secretary of the Cercle wrote, “Let us hold more and more of these fraternal meetings at which we enjoy one another’s company, speaking from the heart, in the language of our forebears, about the glories of the past, the needs of the present, and our hopes for the future.” 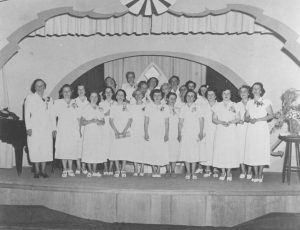 In 1941, the 52 Cercles in the Laurentians joined together to establish Fédération 16. Joint exhibitions were organized by multiple Cercles, often combined with study days. In 1949, 1953 and 1954, our Fermières shone, winning first prize in the competitions organized as part of the exhibitions.

During that same period, in addition to its monthly meetings, the Cercle organized activities  such as festive gatherings, concerts and local exhibitions in its municipality.

Being a Fermière in the 1940s (subtitles available in FR and EN). Watch the video with the transcript (EN) 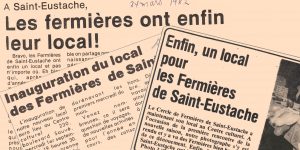 By the 1970s, Cercle membership had grown to 250. The Fermières met once a month at a venue that was on loan to them. In 1982, the Cercle moved into its first temporary location at the Centre culturel de Saint-Eustache. Five years later, the association obtained its first permanent meeting space in a building on Rue Saint-Viateur, allowing it to hold weekly craft activities. This marked the beginning of the Cercle as Alice knows it.

The Cercle gets its own meeting space ! (Being a Fermière in the 1940s). Watch the video with the transcript (EN)

In 2005, the Fermières moved to a larger location. Since then, thanks to the involvement of new members, they have expanded their range of activities. As Fermière Normande Gaudreault puts it, “Every member has her own special contribution to make, and that’s the important thing!”