John Mark, who was Chief when we moved to Wemindji, says that Wemindji was far more isolated before the roads and communications systems were in place. Now it’s almost hard to imagine that in the 1960s,

“Wemindji was accessible only by boat and by air. There were no roads out of the community.  There was a radio telephone that sometimes did not work for a couple of days at a time.  The news we got from CBC Radio came out of Newfoundland and Labrador, not Montreal.  The mail could be delayed for six weeks during freeze-up and then again at break-up.  We needed an airstrip so we built one with volunteer help.  That whole project cost under $1000. ”  John Mark, 2009 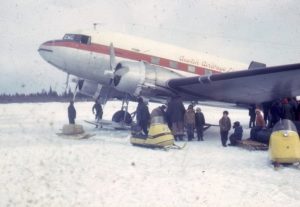 Unloading groceries from the DC3.

Before the airstrip was built, a small float plane came in every week with supplies and passengers.  In winter a bigger plane landed on the river ice. 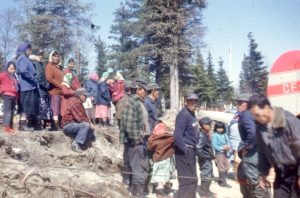 Gathering on the banks of the river to meet the plane.

When the plane landed everyone dropped whatever they were doing, no matter what it was, and ran down to the banks of the river.  They would greet whoever was coming in and we all helped to unload the cargo and get it to shore.

There were changes of every kind as people settled into life in our new village. There were jobs in construction, for example, and other new kinds of work to be done.  Early on, the clinic was built. The new school meant that our children no longer had to leave home for residential school.