American Paul Harris and a couple of his business associates formed Rotary International in 1905. They were looking to form a club for comradery, fellowship and the opportunity to do good works. By 1910, there were numerous clubs across the United States and by 1915, there were Rotary Clubs around the world.

Rotary in The Pas started September 1, 1928, when J. A. Caulder, the Director of Rotary International in Canada, sent Dune Campbell of The Pas literature relating to Rotary, suggesting he look into the possibility of starting a club. Mr. Campbell met with Fred Siebert, a past member of the Rotary Club of Ottawa, and Mr. Pat Hunter about the possibility. These initial discussions were the beginnings of Rotary in The Pas. The following month, on October 26, 1928, Joe Caulder and Henry Grimes, from the Dauphin Rotary Club four hours south, visited The Pas. They held a luncheon meeting with those interested in the formation of a Rotary Club. The application was sent at the end of the meeting to Rotary International from the Rotary Club of The Pas.

Rotary International granted The Pas’ club their charter on January 15, 1929, with the official first meeting of the club held on January 16, 1929. Past Governor Stuart M. Campbell from the Winnipeg Rotary Club presented Charter Number 3019 to the club with the following charter members listed: 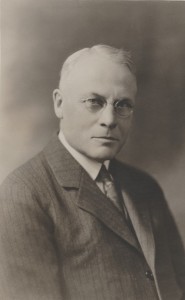 Meetings were initially held at the Cambrian Hotel on 3rd Street; however, in 1937, the United Church Women’s Auxiliary began catering the club’s luncheons in the basement of the Westminster United Church on Edwards Avenue. This continued until December 19, 1978, when the meetings were moved to the banquet room of the Wescana Inn, located on Fischer Avenue. For the next 22 years, the Rotary Club of The Pas met at the Wescana Inn before successively moving to the La Verendrye Motel then later the meeting room at the A&W (both located on Gordon Avenue). Rotary Club meetings through the summer of 1991 were held at the Halcrow Lake Golf & Country Club, west of The Pas.  Meetings began to be held back at the Wescana Inn in September 1991 and continue at that location to this day.

The club hit the ground running. One of their first major projects was contributing to the construction of a swimming pool in Devon Park on the Saskatchewan River. Working with other groups in The Pas, this was one of many initiatives the club undertook.  Throughout the next two decades until 1949 a carnival was held each year in Devon Park until it was moved into the indoor rink that had been constructed in 1948 (the local Rotary Club donated $1000 towards the rink’s construction). The proceeds from these carnivals went directly back into the community to assist where needed. During this same time, as the Second World War continued, the club became actively involved with the war effort through the sale and purchase of War Saving Stamps and Victory Bonds. While these funds did not immediately go back to the community, they assisted Canada on a national level. 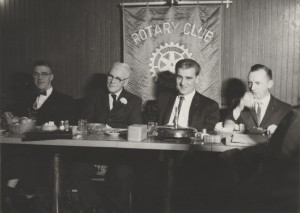 The Northern Manitoba Trappers’ Festival is an integral part of The Pas, and the Rotary Club began assisting in the festival the first year after receiving a charter. Among the various popular activities during Trappers’ Festival is the crowning of the Fur Queen. Fur Queen candidates are each sponsored, with the Rotary Club sponsoring Fur Queen candidates in various years; the club became involved in running the Community Competition and the Trapper Competition Crowning events in 1965. In 1984, the Rotary Club began to dispense hot chocolate following the parade that helps kick off the festival. In 1995, the club donated $500 towards the prize monies of the World Championship Sled Dog Races and sponsored a Snowshoe Marathon.

In 1985, the club became a sponsor of the local Boy Scouts. Over the next few years the club invested $525 in leader training for the Boy Scouts, and starting in 1988, a trailer with washroom plus shower facilities was moved to and set up at the Scout camp on Clearwater Lake, approximately 20 km north of The Pas.  This was part of the upgrade carried out to the camp by the Rotary Club over the next few years. Financial assistance has also been given to assist the Scouts in attending national and international gatherings. Support has also been given to the Flin Flon Scouts and the local Girl Guide units.

The Rotary Club became known in sports and recreation circles with the sponsorship of the local Pee Wee Hockey Team in 1949 and the Midget Hockey Team in 1957. This continued through the 1960s with annual donations to the Minor Hockey Association. With a new indoor swimming pool in the works, the club donated $5,000 in 1970 to the Town of The Pas for use towards construction at the local high school, Margaret Barbour Collegiate Institute. In 1981, 1983 and 1991, sets of sweaters with crests were donated to the Minor Hockey Association. Furthermore, in 1983, $610 was donated to The Pas Junior Huskies with the funds used to provide equipment for two players. The club donated an impressive $25,000 to the Town in 1982 towards the cost of improvements to the Roy H. Johnson Arena. The local Rotary Club saw the necessity for a new concrete floor for the local arena, so they began fundraising and presented a cheque to the town for $100,000 to offset the renovation costs. As the second part of this project, Rotary provided enough tables and chairs for the Arena to handle 1,000 people. Following this, in 1989, the club donated $2,300 towards uniforms for the track and field team as well as the volleyball squads at Margaret Barbour Collegiate Institute. 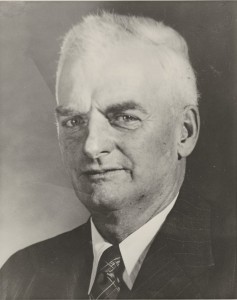 The local Rotary Club also supported other community organisations such as The Pas Music Festival.  The Club purchased a trophy shield to be presented at The Pas Music Festival in 1949. From 1974 through the 1990s the club provided a scholarship for local students to attend the International Music Festival at the International Peace Garden. In 1973, $2000 was donated to the town band for uniforms and from the band’s beginning 93 students participated. The club also contributed $200 in 1981 to The Pas Music and Speech Arts Festival to assist in covering the cost of five adjudicators. They also began recurring donations to the Kelsey School Division to help cover participation relating to the Northern Manitoba Regional Science Fair.

The Rotary Club had a long-standing association with Sam Waller and the Sam Waller Museum. Mr. Waller had been a teacher for many years, amassing a large collection of various artifacts from the local area and around the world. Originally known as the Little Northern Museum, in 1948, the Rotary Club sponsored the exhibition of a portion of his collection. A decade later, the first Little Northern Museum opened on February 2, 1958, with Mr. Waller as the owner and curator of the museum. Eleven years later, the Rotary Club began raising money to construct a new building for Mr. Waller and his museum. The money was added to contributions from the Province and the Town of The Pas, so the new Little Northern Museum was able to open on September 1, 1970. Mr. Waller passed away in 1978. Successful talks began in 1981 between Rotary and the Town of The Pas with regards to moving the Museum to the Town of The Pas’ original Courthouse. After much work and fundraising, the Museum renamed the Sam Waller Museum, officially opened its doors in 1994.

The Rotary Club has also been a regular contributor to the local Meals on Wheels program beginning May 1986.  They deliver meals during the months of May and November, an act of service which continues to this day. The desire to fund more ongoing projects lead to the construction in 1989 of the Rotary Playground Park located on Cathedral Avenue. That same year the club made a commitment of $20,000 towards the purchase of a new Handi-Van (a van for door-to-door service for people with mobility issues) to be used in the area. This followed previous donations of $500 to the group which operated the Handi-Van in 1979, 1981 and 1983.

The Rotary Club of The Pas has worked hard since their chartering to help the community through these and other projects. Their work in the years to come will continue to bring positive change and support to their fellow citizens.

Order of the Royal Purple Freemasons