The City wanted to get the Chinese buildings outside of city limits.

The Chinese immigrants who settled in Chilliwack, like elsewhere in British Columbia, regularly faced both social and institutional discrimination. 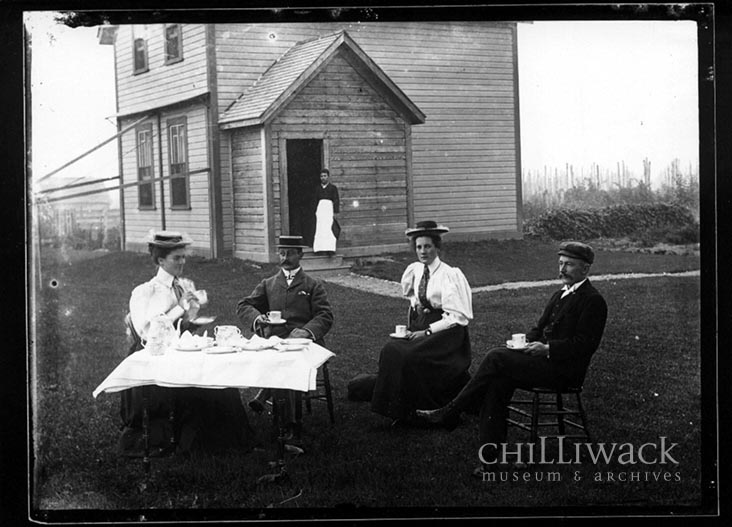 This photo shows the power dynamic between Chinese domestic workers and their employers.
Chilliwack Museum and Archives, PP500132

Chinese immigrants and families suffered much from racist sentiments of the era. Chinese newcomers arriving in Canada between 1885 and 1923 were subject to the Chinese Immigration Act, a federal law requiring all Chinese individuals immigrating to Canada to pay a head tax. In 1907, a chapter of the Asiatic Exclusion League opened in Vancouver, B.C., leading to demonstrations and protests against those of South Asian descent immigrating to Canada. Police raids of Chinese businesses throughout the province and in Chilliwack were common.

Watch the interview below with Dr. Chad Reimer, author of Chilliwack’s Chinatowns to learn more about extent of racism towards Chinese immigrants in Chilliwack.

Misconceptions and negative stereotypes about Chinese culture and values abounded amongst the Euro-Canadian community, and the concept of racial superiority was an underlying aggravator in many interactions. After its launch in 1891, the local newspaper The Chilliwack Progress provided local columnists with the opportunity to air their grievances concerning the presence of Chinese immigrants in B.C.

The following links are to articles that demonstrate racist sentiments and language:

The combination of a language barrier, along with the relative social isolation of Euro-Canadian and Chinese communities, meant there was little opportunity for cross-cultural exchange to combat these stereotypes. The Chinese community adopted a meek and agreeable public face as a defense mechanism.