Wright Model B at sunrise. Photo courtesy of Carol Nicholson

Roy in his Royal Naval Air Service uniform, circa 1916.

Arthur Roy Brown was born in Carleton Place, Ontario, in 1893, the eldest son of a prosperous and influential family. As a youth, he excelled in sports and school, and demonstrated leadership skills and a strong sense of duty. He led many sports teams to victory, and pursued his studies with the goal of someday taking his place in the family business.

With the outbreak of the First World War, Roy did not rush to join the fray, but finished his studies and then deliberately chose a path he felt would enable him to best serve the Allied cause. After careful consideration and with his father’s advice he chose to join the Royal Naval Air Service, and at his own expense, obtain his pilot’s license.

He was not a glory seeker but approached the business of war in a methodical and aggressive fashion. In spite of delays in his training, including a serious injury, he did not quit, but pressed on through adversity. He became a combat pilot whose skill and leadership was immediately recognized by his superiors through rapid promotions and assignments to command positions.

He was twice awarded the Distinguished Service Cross while flying with the Royal Naval Air Service and the Royal Air Force during the First World War. He is highly regarded not only for his performance as a skilled combat pilot, but also as the leader of the fellow airmen in his squadron.

Post-war, he was a pioneer in the Canadian aviation industry, creating an airline company that opened aerial access to Northern Ontario, Quebec and Manitoba. His company, General Airways Limited, operated through the Depression years.

His contributions to military and civil aviation in Canada resulted in his induction into the Canada’s Aviation Hall of Fame in 2015.

Produced in partnership with the Carleton Place and Beckwith Heritage Museum and the Roy Brown Society. 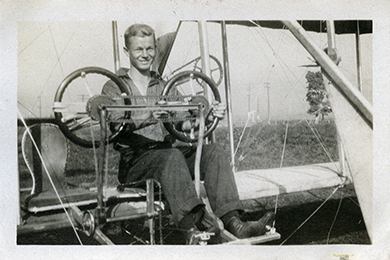