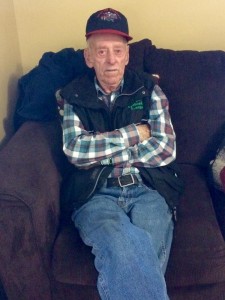 In 1953, John Hayse Senoir from Parker’s Cove was getting ready to go back to the lumber woods in Glenwood Nl. His son John Hayse Jr. was only 14 years old at the time and thought he was ready now to go to work. His parents John and Margaret didn’t think it was a good idea, with him being so young. 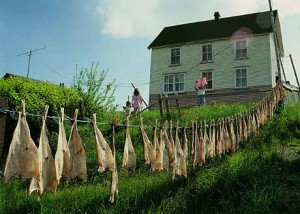 Fish on a clothesline in Hayse’s meadow in front of John,Sr.’s house

At that time there were only two cars in Parker’s Cove, so John Senior left and left his son behind to return to school. John Jr. was determined to go to work in the lumber woods with his dad and went to Tom Dunphy, a merchant in Parker’s Cove and he gave him a ride to Goobies to catch up with his father and take the train to the lumber woods camp. Once he arrived at Goobies, all his father said was, “If you wants a lick of it, come on.” Listen to some of what Jack had to say about his first trip to the lumberwoods.

At that age you don’t really know what to expect and John Hayse Jr. was very homesick that first two weeks. He said to himself “what did I get myself into” but he continued on and after two weeks he was hardened into it and got over the homesickness while working away along side his father.

They stayed in lumber camp provided and so did 131 other men. To get to the camp you traveled 30 miles up the lake and 20 miles to the camp. Breakfast was cooked, lunches were packed and board and lodging cost .50 cents per day. 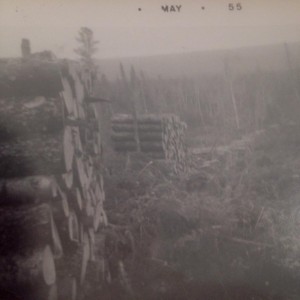 Stacks of logs piled for measurement in cords

An average day for the two  men was from daylight until dark. They were long days and as the wood got cut, the further you had to walk. Using a bucksaw and axe all day wasn’t easy work. When the winter came the horses and sleds would go in and get the piles of wood.

John Jr. and his father worked side by side and cut at least two cord of wood a day. At that time the cord of wood was between $4.00 and $5.00. Which meant in those times a good days pay. Payday was every 18 days. Your wood had to be scaled and numbered before you could get your paycheck.

They worked with other men from Parker’s Cove as well at the camp that year but John Jr. said most have passed on now.

John Jr. doesn’t recall any accidents from working in lumber woods but does remember all the bear and moose he saw. They couldn’t leave anything behind only sugar in a glass bottle. They wouldn’t touch that he said.

At night he enjoyed the jokes and the laughter from the older men. Being only 14 he heard  things that he thought never existed. He went to sleep every night to laughter and that’s what kept him going.

John Hayse Jr. stayed three months at this camp and from there worked 10 years in the lumber woods from place to place.

After he left the lumber woods he continued to work at various jobs. CP Rail, Construction and finally retiring with as a carpenter with a housing company in Newfoundland. Life was not always easy  he said, “But I think it turned out okay.”