Joseph Lockyer resides today at Boat Harbour NL, but at the young age of 15 he left home to go to work and for the next 50 years he worked in many places.  Joseph retired at the at of 76 and then went back to his hometown of Boat Harbour Nl permanently.

It was in 1953 at age 15 Joseph decided to go to the lumber woods in Deer Lake to work.  Even though his parents didn’t want him to go, he said that everyone else was going so he figured he should go as well.  Harold Walters traveled with him and worked along side of him for the first month he was working in Deer Lake.

They both took a taxi to Goobies that day in 1953 where he met the train that took him to Deer Lake where he would be starting his career. Now over 50 years later he sat with me telling me the story of his work life as it started so many years ago.

Pay back then in the lumber woods was $6.00 a cord and he would make 80.00 a month with a $1.00 a day took out of that for board and lodging. It was hard work back then he said as they only used a buck saw because there was no chain saws  then.  Joseph stayed working in Lumber woods for 4-5 years seasonal.  He would get to come home for a month or so every three months because he said you could always get a job cutting wood.  Joseph was 40-50 miles in the woods at Deer Lake so when he got his first Paycheck he had to go into Deer Lake.  His first purchase out of his hard worked money was a sleeping bag and a suitcase.  Joseph grew up with his wife and at the age of 18 they married and had one child.

His travels from there took him to many places and he said there isn’t many he hasn’t seen in his day. 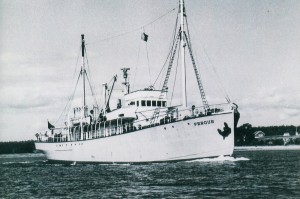 He went to sea after the lumber woods on a ship called MV Fergus in Nova Scotia.   He became a steward and then later went seaman. “I was sea sick for the first few days” getting use to the waters he recalls. Money was a little better then, he would make $140.00 a month. 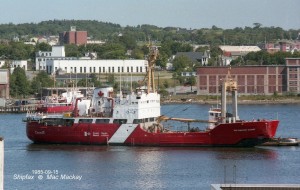 From there he worked on a Coast Guard ship called Sir Humphrey Gilbert.  Travelling all around the Maritimes, Atlantic Canada and to the Arctic. Communication wasn’t like it was today he recalls. Letters and telegrams were the only way to communicate to your loved ones at home.  He remembers a time when working with the coast guard that he went to work at 5am one morning and worked until 1am the next morning.  After 8 hours he said you would get $1.00 an hour overtime. Time home was scarce when working with the coast guard.  Joseph would only get 6 weeks holidays a year and he took those six weeks in the winter time to be home with his family.

Joseph then went to work on a long liner for a year and a deep sea dragger out of Harbour Breton for two years.

Construction then became a big part of Joseph’s life, spending 17 years travelling wherever work took him.  Starting with Grandy’s Construction in Fortune getting $1.20 an hour. Supervising some big jobs with 32 men under his direction and another 32 sub trades.  Safety was a big thing and construction was dangerous work.  Working in Churchill Falls he said there were quite a few people that got killed on that job site. It wasn’t always easy back then.

Even after retiring at 76 in 2014 he felt he should go back at it and even this year he has gotten calls to go supervising jobs. When spoke of it to his wife saying “think i am going to go again” her response was “no you’re not”. 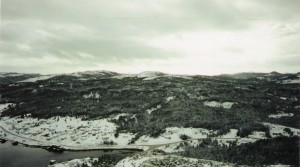 Joseph and his wife now reside in Boat Harbour Nl and when he wakes in the morning he says he has to find something to do to keep him busy.  The road through hard work comes with much determination and sacrifice.

Leaving home in 1968! Service to our Country