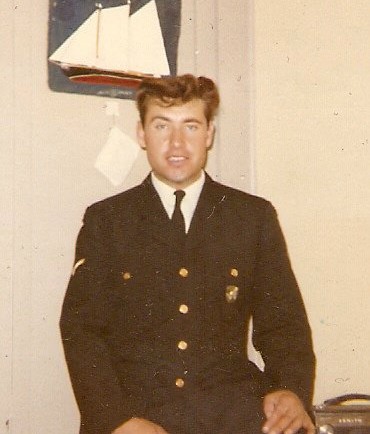 While working on the CP Railway in Windsor Ontario at the age of 22, Aloysuis (Al)  Murphy had taken a day off work. His day was set out to post a parcel home to NL, but little did he know what lay ahead. In Windsor, Ontario that day after posting a parcel to NL he noticed a sign that said “Recruiting Centre”. Without a thought he went and joined the Armed Forces. For the next six years he spent eleven months with the Canadian Armed Forces and one month home a year. 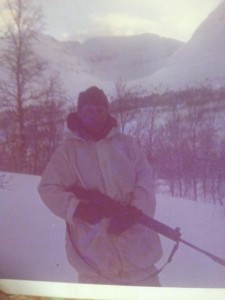 His Canadian Armed Forces days began with a six month training in Resolute Bay, North West Territories. He served in Denmark, Norway, and Germany as well.  He described boot camp as pretty rough. He even had the okay to leave but when the time was up to do so, he decided he would stay, and spent his next 6 years as a soldier in the Armed Forces serving our country. Once boot camp was over they could leave the base on a weekend pass but other than that he said there wasn’t much to do if you had spare time. 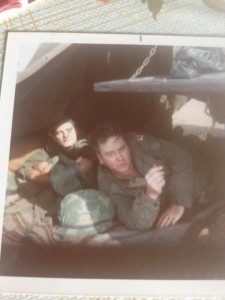 Accommodations were good, says Aloysuis. In boot camp there were four beds to a room. When boot camp was completed there were usually two in a room. Once appointed to Corporal he had his own room. He said that was pretty good.

During training in rubber boats on the Ottawa River, upon coming to a falls about 12 feet high, they turned to shore before being given the order to do so and the officer in charge wasn’t too happy. They were made go down the river a little further, got caught in the current and went over the falls. Everyone survived he said but one solider from Niagara Falls got medically discharged. “It was a scary moment for all of us” Aloysuis said.

While he was serving, there were other soldiers from Burin Pensinula as well; men from Lamaline, St. Lawrence and Marystown. Most of the Canadian soldiers were from New Brunswick to Newfoundland. 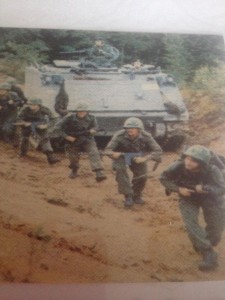 Al Murphy and other soldiers

The field wasn’t easy with working round the clock 24 hours. When you were on base the days weren’t as difficult. They would be done around five or six o’clock in the evening. There was a time he remembers he was 36 hours with no sleep whatsoever.

His parents in NL were really worried, he said, during the years he spent in there Armed Forces. He said his mom  nearly went off her head with him being gone for eleven months out of the year and little communication put a lot of worry on his family back home.

In October of 1970 Aloysuis was called down to Montreal for the October crisis. The troops were there he said until it was over and it was January of 1971 before they got back to Petawawa base. Two men were kidnapped in this crisis and killed. There was another man that was targeted but they rescued him. Alyosuis said “we were armed to the teeth” as he described it. April of 1971 the Armed Forces were called to Kingston Penitentiary where there was 500 prisoners loose. There was a riot inside, he said, and it took about a week and a half to get them out of it. Word came up from Ottawa to enter the penitentiary but before they went inside a white flag was put outside the window and the prisoners surrendered. If they hadn’t surrendered, he said the soldiers would have had to enter which would likely have led to fatalities. 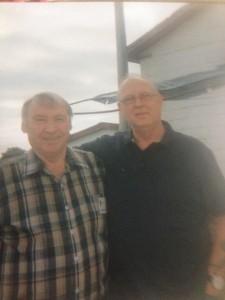 Alyosuis said he built some lifelong friendships and to this day communicates with them, from Newfoundland to Vancouver. Every year he attends the reunion for Armed forces. October will be the next annual reunion and it will be held in Cape Breton. He said he will be making the trip with his wife, where he will get to see some of the men he built such strong friendships with while serving.

After the Canadian Armed Forces Aloysuis worked in many places. He met his wife and settled for a while in Lab City, but after having kids they moved to Parker’s Cove and they still reside there today.

As I was talking to Aloysuis Murphy that day Aug. 21, 2015, I discovered that he had signed all the forms at his workplace that day, and was officially retired after 52 years in the work force. What an accomplishment to say the least. When asked what he planned on doing now his response was,”Enjoy ‘er now”.

Retired at 76 Labour of Love