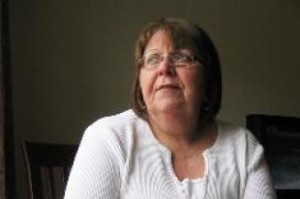 Nora Dodge sat with us and told us about her husband (Calvin Lake’s) days working with CP Railway.  Calvin Lake was only 16 years old when he ventured off to work with the CP Railway after dropping out of high school. That day at the young age of 16 in 1968,  he headed to St. John’s to board a plane to head out west to Ontario to begin his working career.

Calvin worked in Ontario and Saskatchewan.  His work entailed using a device similar to a jackhammer to nail down bolts that kept the railway track in place. The working conditions weren’t the best in those days. He lived in a trailer cart with 19 other men and there wasn’t even any running water.  The temperatures would get as high at 100 degrees Fahrenheit, so working all summer long in those conditions wasn’t an easy task.

The work terms were long then as well, there were no turnarounds like today, and once Calvin left home he was gone from March to October every year and longer in some cases.  In 1968 Calvin was making $100.00 per week on the railway, which was considered good money back then.

Leaving home wasn’t easy especially on the family.  They weren’t overly fond of him working away, due to both the distance and the type of work he had to do.  In 1968 in a rural community such as Rushoon NL, this was viewed as one of the few forms of work available to males who decided to drop out of school.  At that time there was a lot of high school drop outs and in a little place like Rushoon there were at least three-quarters of the men that took this trip away to the railways to work each year.

Nora recalls how fond he was of his co-workers.  They would get together when they weren’t working, and share countless stories of the time they spent with each other .

Work was hard on the railway in 1968.  They would begin their day around 7am in the morning and would continue to work until 7pm in the evening depending on the time of year it was and how early it got dark. They would take a lunch from the lunch cart and after work would head back to the food cart in the evening collecting water from barrels that were placed in the barracks.

Nora says he travelled to other areas working. He spent a portion of his working days with CP railway in Ontario.  After that area of work was completed he moved to Saskatchewan to to continue on with the same type of railway repairs.  This line of work forced Calvin to move through different regions of both Provinces and led to different stops in various towns throughout the provinces.

On May 28, 1980 in Swift Current, Saskatchewan, a highway  crash  killed 12 from the province of Newfoundland. Calvin Lake was one of them. 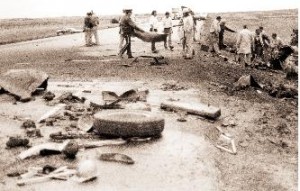 Learn more about the accident that claimed the life of Calvin Lake and 21 others.

Special thanks to Nora Dodge