The Lady Anderson was a hospital ship that provided service to twenty six ports in the Placentia Bay area in the 1900’s. Leo Gaulton was one of a crew of nine that did this monthly trip. He would board the boat and visit twenty six ports along with a doctor to provide medical care and transportation to Argentia hospital. The trip would start at Red Island and go out as far as Port Elizabeth island. 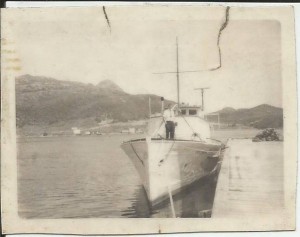 Leo Gaulton on the Lady Anderson

Leo was 18 years old when he first boarded the Lady Anderson. He had finished high school and even though his parents didn’t want him to, he became a deckhand for this ship that some called the healing boat. 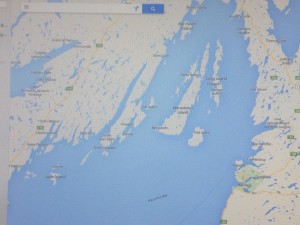 Everyday when they stopped in port the deck of the boat would fill with patients that needed medical care. Most days the doctor would see 25 or 30 people. The bigger the port the more patients would come on board. They would take their turn and the doctor would give them the medications they needed. There were no drug stores back then so they carried medicine for the sick people.

As a deckhand Leo had to start his day 7:30 am. He would begin his daily routine by shinning all the brass on the boat, brass rails and all the brass window handles. The floors had to be swept, windows had to be washed and then you would have to get the water hose and wash down the deck. Once this was done he said you would have to do some painting, but was always kept busy.

Tuberculosis was an epidemic at that time and they came across cases in which the individuals came on the boat to be treated and ended up in the sanatorium, where they would stay for long periods of time before being able to go home.

another port for an emergency. The doctor couldn’t do much for the patient and the patient had to be brought to Argentia to the hospital . The patient died during the night before they could get her to the hospital. Leo also remembers a couple of babies being born on the boat.

In the time he spent travelling around the bay he said he seen a lot, not only with the patients but weather conditions as well. The sea would get rough but through it all he says he enjoyed his time on the Lady Anderson. The boat was nice, clean and all white linen that would be dropped off in Argentia to be washed for next trip.

Leo’s brother, Pat, was also on the boat. He was there before Leo came on but for the duration of Leo’s time there  was only one other person he knew beforehand and that was his brother.

Leo spent five years on The Lady Anderson and enjoyed them. Rumors were floating around that the boat was being taken from the waters, due to resettlement. People were relocated from the islands to the mainland and the service would no longer be needed. That’s when he decided to move on. He met his wife in Baine Harbour, married and started a family. He still had to leave home for work but it was no longer with The Lady Anderson.

Transcript of Leo’s memosries of life aboard the Lady Anderson

Up Gander Lake RC Palace St. John’s as a Servant