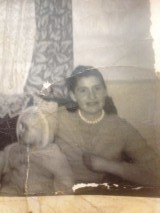 Rita Murphy with one of her wards

As I sat with Rita Murphy, I listened to many stories from the days when she was away working from home. She was 20 when she left home for the first time to help a family raise their children. It was a day she said she will never forget.

It was in 1962 she went to St. Lawrence with the Quirk family to help with the housework and raising of four children at that time. She did the cooking and cleaning as well helped with the four kids. After she went there they had two more children so she now had to care for six children. Rita enjoyed it very much she said and loved the kids dearly. She spent 4 years with the Quirk family.

When asked Rita said, “I enjoyed it, but the hardest thing was feeling lonesome and missing the crowd.”

In 1966 Rita worked at the Convent in St. Lawrence where she cooked, cleaned for eight years. While living in St. Lawrence for 12 years she tried to get home as much as possible, but sometimes it was difficult: 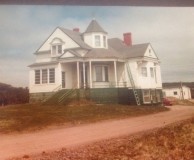 The Priest’s House in St. Bride’s

In 1974 Rita moved to St. Brides to live with the priest as she then became his housekeeper. She had her own quarters where she spent a lot of time alone. Her sister Bernice would make a trip to visit but she only got to come home once or twice a year from St. Brides. She said she only got to go home whenever she had holidays and that was usually just before the priest took his because she had to be there when the new priest came. In 1982, Rita left St. Brides.  She said she met a lot of people over the years and had the opportunity to return to St. Brides in July, 2015 with her brother. It was 35 years since she left and the place was unrecognizable to her. 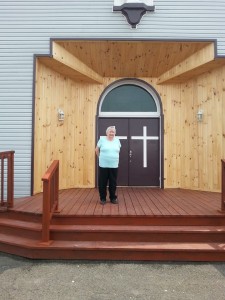 Rita Murphy in front of St. Brides church in 2015

The school and the church remained in the same place but everything else had changed. She met a lady whom she knew quite well when she was housekeeper there and had a nice chat. It was really nice, she explains, to be able to go back and see people who she came to know well and relive some memories she holds dear to her heart.