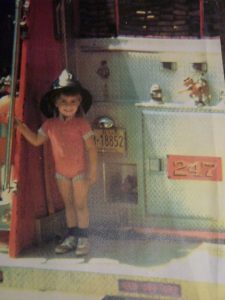 Sylvie Aspiros at the age of 4

From earliest childhood, Sylvie Aspiros was fascinated by her father’s work. She watched him drive off in an impressive fire truck. Firefighting, both as she imagined it and as it was experienced in reality, played a formative role in shaping young Sylvie’s mind. During her childhood, her father, Valmont Aspiros, worked hard. Firefighting means spending long periods away from the family. Social and community activities organized by the firefighters are crucial times for bringing firefighters’ work and family lives together. Every Sunday, a breakfast is organized: families and firefighters sit down to a meal together. Sylvie practically grew up at the fire hall; the Saint-Eustache Fire Safety Department is her second family.

Sylvie believes the influence of both her parents played a key part in her decision to become a firefighter. Quickly, her father taught her that life is full of obstacles and that teamwork is essential in order to overcome them. Her mother encouraged her to challenge herself, be determined, and not be afraid to pursue her dreams. The combination of values of volunteerism, camaraderie, determination and perseverance shaped Sylvie Aspiros’s character and personality.

Not only is firefighting extremely demanding, but when you’re a woman in a male-dominated world, the adversity can quickly become suffocating. Sylvie Aspiros is fortunate to work with exceptional colleagues. She believes firefighting is like any career: as long as you work hard and believe in yourself, you can get what you want in life.

Valmont Aspiros is deeply moved to see his daughter following in his footsteps. He is extremely proud and has never doubted her ability. In 2018, Sylvie Aspiros was awarded the Governor General’s Medal for her twenty years of service. An emotional moment for father and daughter!

At the Heart of the Saint-Eustache Community A Generational Story: the de Rouville family