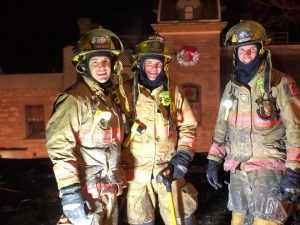 Without a uniform, there would be no firefighters! Not only for putting out fires, but also for everyday life at the fire hall. Firefighting gear, which firefighters call a “bunker,” is made up of a coat and a pair of pants each of which has three layers: an outer shell, a watertight layer and a thermal layer. There is also the helmet, of course, which has the firefighter’s name and registration number on it. The helmet has a neck protector, an ear protector and a visor. The firefighter also wears gloves and waterproof boots, as well as a respirator that by itself weighs more than twenty-five pounds. All the gear adds up to more than fifty pounds, and it can weigh an extra seven to ten pounds when it’s wet. 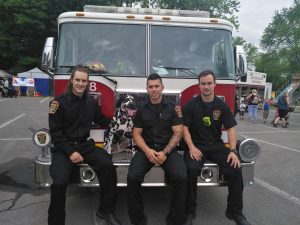 When the firefighters aren’t busy putting out fires, they wear a button-up shirt, a pair of pants and work boots. Although they are sometimes allowed to work in short sleeves, firefighters never forget to wear their shirt and tie for any official functions outside the fire hall; whether it’s a meeting at a citizen’s home or a fire prevention awareness campaign in schools, the uniform is required.

The Everyday Uniform (subtitles available in FR and EN) – Watch the video with the transcript (EN).

In Saint-Eustache, the uniform shows the firefighter’s rank. A lieutenant’s uniform has two silver bars on the epaulettes, and a captain’s has three gold bars. Only the department chief’s uniform has a gold star.

Uniform and Uniformity (subtitles available in FR and EN) – Watch the video with the transcript (EN).