On December 27, 1942, holiday crowds and poor weather delayed the Ottawa Valley Local passenger train as it travelled through the small towns of Arnprior, Pakenham and Almonte.

Unknown to the crew, a troop train carrying soldiers to Halifax followed. The troop train had been ordered to follow 20 minutes behind, but it quickly gained ground after leaving Arnprior Station. Warning could have been given at Pakenham Station, but unmanned on weekends, the lights shone green instead of red. The inevitable crash occurred when the troop train rounded the corner into Almonte, and unable to stop, smashed into the rear cars of the Local, still boarding passengers.

One of the Worst Accidents in Canadian Railway History

It was one of the worst accidents in Canadian Railway history, resulting in 39 deaths and over 150 injuries. The fire siren alerted Almonte citizens to the chaos, as soldiers from the troop train leapt into action, pulling injured civilians from the wreckage. Local residents brought aid and comfort to survivors. Doors and tables were used as makeshift stretchers, and the O’Brien Theatre became a temporary hospital and morgue. Described by one survivor as “the night the war came to Almonte,” this local tragedy not only shaped the lives of the passengers and residents of Almonte, but also Canadian railway history.

This exhibition is the result of many years of research by the North Lanark Historical Society, and their dedication to preserving the memories of all who were affected by that fateful night. Special thanks to Melissa Alexander, Sarah Chisholm, North Lanark Historical Society Board members, and the countless volunteers who dedicated hours of their time to ensure the success of this project. 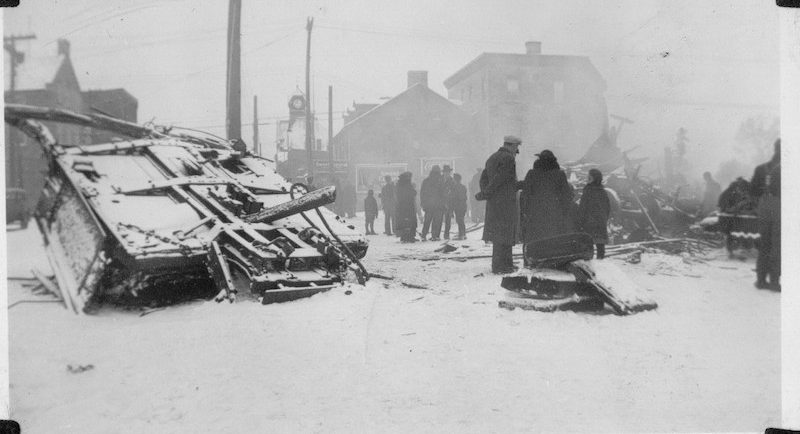