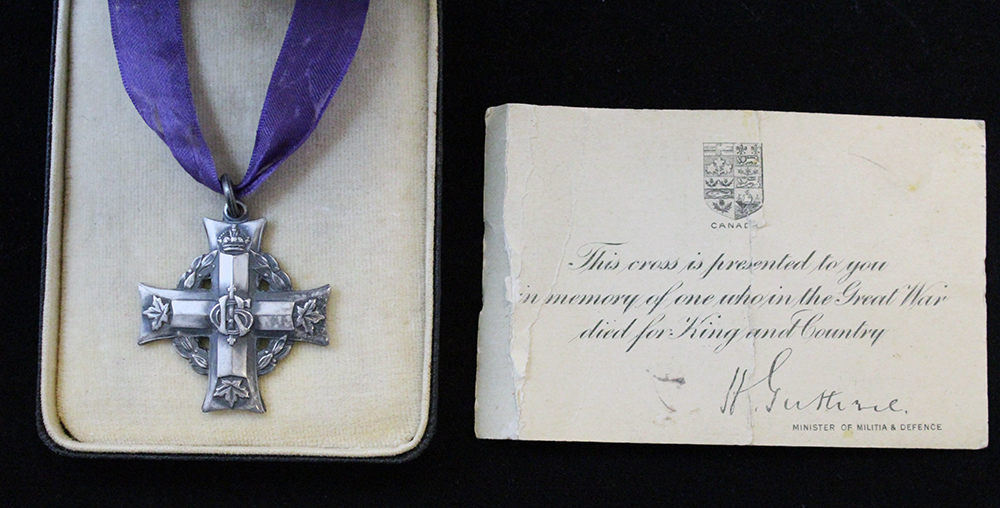 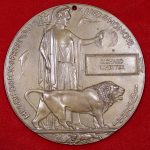 Although soldiers’ families were discouraged from mourning publicly, recognition for individuals in grief preoccupied the authorities as well as local organisations, mostly after the hostilities ceased.

In October 1916, the British Government was exploring the idea of a commemorative plaque for the next-of-kin of men and women whose deaths were attributable to the Great War. The memorial was produced only starting 1918, in the form of a circular brass plaque, 12 cm in diameter. Over 1 million were distributed across the British Commonwealth as of 1919. Also known as the “Death Penny”, the memorial plaque was accompanied by a scroll and a cover letter, both signed by King George V. 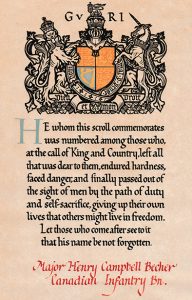 The Memorial Cross was instituted in 1919, and was intended for female next-of-kin, hence the more popular name, “Mothers’ Cross.” It was the medal that nobody wanted. In the shape of a Greek cross with the royal cypher centered and maple leaves at the end of each arm, this medal was a Canadian award. A total of 58,500 Silver Crosses were issued in the 1920s and mailed to Canadian mothers or widows accompanied by a card with the signature of the Canadian Minister of Militia. “Death Pennies” and “Mother’s Crosses” alongside the scrolls and cards that came with it, are some of the most common artefacts of war mourning found today.

There were also non-governmental organisations that participated in public mourning. The Associated Kin of the Canadian Expeditionary Force, an organisation created by prominent Londoners to increase recruitment, also developed a badge of mourning. They created the bronze medal of the International Order of Allied Mothers in Sacrifice (IOAMS), awarded to grieving mothers across Ontario. The IOAMS medals were carved with the soldiers’ names on the front, and the mothers’ on the back; they were created to inspire recruitment. Once the war ended, these medals stopped being produced and have largely been forgotten, but they were an important local contribution to public bereavement.

The First World War had a lasting impact on the way Canadians mourned their dead. Following the war, families did not revert back to traditional Victorian mourning customs, and instead practiced more unique, individual forms of bereavement. Much of the associated material culture we have today exists because family members of fallen soldiers, like the wives or mothers of Becher brothers, Private Woolley, Private Legge or Lance Corporal Whetter held on to the personal items of their loved ones killed in war.