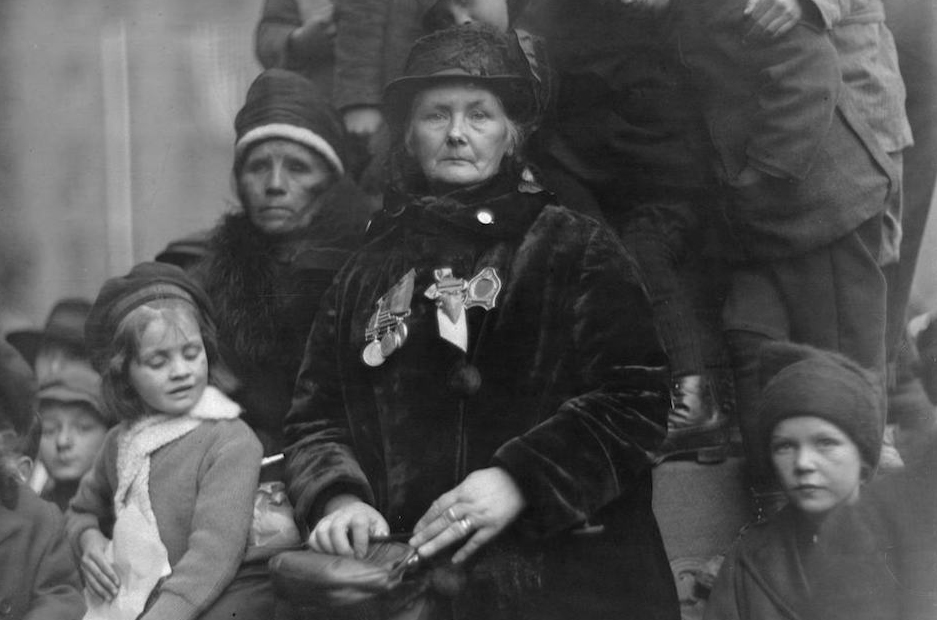 While Londoners were working to support the war effort, daily casualty lists brought the realities of war home. Elaborate Victorian mourning practices extended to London, ON, but they seemed inadequate and inappropriate to address the mass deaths. During the First World War, practices associated with death and dying changed from an outward display of grief to an individual and private expression of mourning. 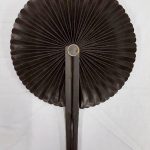 Women began to forgo black crepe widow’s caps and dresses, and months of social seclusion, mourning was internalised so as not to decrease morale and diminish peace. Black mourning dress was discouraged in fear that it would decrease morale and dishearten enlistees. After the sinking of the Lusitania in May 1915, an article was published in the Globe by the National Council of Women of Canada, suggesting that women “wear a band of royal purple on the arm, to signify that the soldier they mourn died gloriously for his King and Country.” 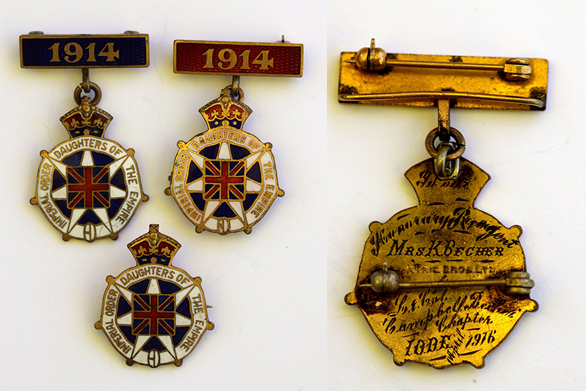 Pins, International Order of Daughters of the Empire
1914 – 1916. Capt. Michael O’Leary Collection, London, ON. These pins were issued to Katherine Becher, mother to Lieut.-Col. Becher and Maj. Becher.

Groups such as the Mothers’ Recognition Committee, based in London, ON, encouraged the idea that mothers were giving their sons as a sacrifice for Empire. Most prominent women in London lost sons in the war, such as Katherine M. Becher, widow to a former mayor of the city, Henry Becher (in service in 1885). Between 1915 and 1916, Katherine would grieve for her eldest, Henry Campbell (killed in 1915, Second Battle of Ypres) and for her third born, Archibald Valency (died of pneumonia in 1916 while heading overseas). Both sons were well-known Londoners: Henry, revered for his leadership, commanded the 7th Regiment of Fusiliers and Archibald, a famous physician, was a veteran of the South African War. In 1916, the local Imperial Order of Daughters of the Empire, was named after Katherine’s first born, “Lt.Col. Campbell Becher Chapter IODE.” 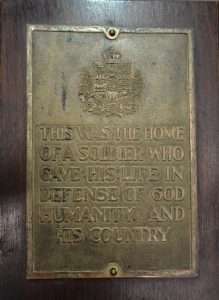 The debate around wartime mourning did not necessarily extend to private homes. Despite the efforts made to change mourning practices, women retained many traditional forms of expressing grief. Families set up individual memorials and plaques in remembrance of their loved ones regardless of their effect on public morale.

Individual mourning practices during this period were complicated by the distance between battles and the home front.  Relaying accurate casualty information to families was a challenge as seen in the case of Private Hamilton’s death. His fellow soldiers wrote condolence letters to the family in May 1915, however, Hamilton’s death wasn’t reported to his next-of-kin until July 1915, leaving the family in a state of uncertainty, forced to postpone their mourning.

Spiritism, the belief that the living can communicate with the spirits of the dead, became an extension of private mourning for many in grief. The mass volume of death that occurred during the conflict, combined with a pre-existing decline in traditional religion, made these beliefs more commonplace. Those who lost loved ones overseas were often left without a body to bury and many questions about the reason for a soldier’s sacrifice. But, mediums, to be found among all social classes and within many religious denominations, would help families to contact their loved ones now deceased through special séances. The intention was often to learn about the circumstances of death and be assured that the deceased had moved onto a better place.