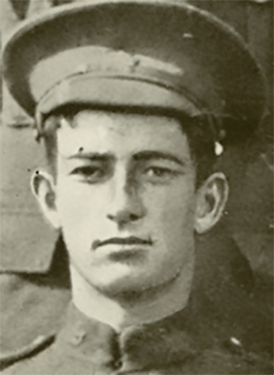 Fox was born on 4 January 1897, in the village of Burton le Coggles, Lincolnshire, Great Britain. In 1906, he immigrated to Canada with his parents, Albert and Elizabeth Fox, eventually residing at 38 Linwood St., London, ON. Pte. Fox left his position as a bookkeeper at McClary Manufacturing Company to enlist with the 34th Canadian Infantry Battalion in 1915. In March 1917, Pte. Fox was removed from service with a septic right hand. After returning to service for less than two months, he was rushed to hospital at the start of May 1917, where it was determined he had suffered a shrapnel wound in his abdomen. Pte. Fox died of his wounds on 25 September 1917, at No. 1 Hospital at Reading, as the shrapnel penetrated his liver.

He is commemorated on page 239 of the First World War Book of Remembrance (Memorial Chamber, Peace Tower, Parliament Hill).