The Huron-Wendat were the northernmost of Iroquoian peoples who, in the seventeenth century, inhabited the area between Lake Simcoe and Georgian Bay known historically as Wendake (Huronia). Their confederacy consisted of four allied nations; the Attignawantan (Bear), Atingeennonniahak (Cord), Arendarhonon (Rock), and Tohontaenrat (Deer). Another population known as the Ataronchronon (Bog) were a division of the Attignawantan. Their name for themselves, Wendat, means “islanders” or “dwellers on a peninsula.” 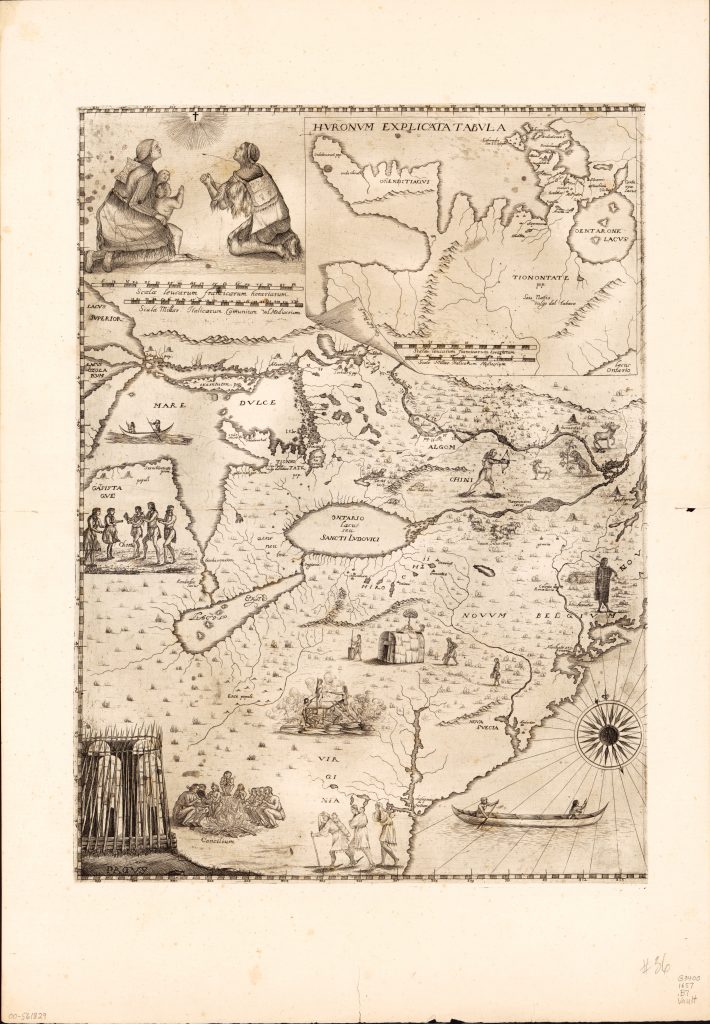 Map of North America, from Newfoundland to Lake Superior, and from the Gulf of St. Lawrence to Chesapeake Bay. A small map of Huronia is presented in a cartouche, 1657. Credit: Library and Archives Canada

The term “Iroquoian” refers to both a cultural pattern and a linguistic family; the latter of these includes the Northern Iroquoians of the Great Lakes Region as well as Cherokee, spoken in the southern Appalachians, and Tuscarora, spoken near the mid-Atlantic coast. The term Iroquoian, therefore, should not be confused with “Iroquois,” a word adopted by Europeans to refer to the Haudenosaunee or Five Nations Confederacy.

The essential elements of Wendat life, like other Northern Iroquoians, was an economy based on horticulture (maize, beans and squash – the three sisters) supplemented by wild plants, fish, and wild game. Communities settled in fortified villages containing bark-covered longhouses that were shared by extended families related on the woman’s side. Clan memberships were extended beyond the village to other communities. By integrating villages within tribes and confederacies, a set of shared governance structures, religious beliefs and ceremonial practices emerged.

What makes Wendake so exceptional… in terms of agricultural production, is its close economic tie with its northern neighbours. The Wendat country was a meeting ground. Algonkian groups consisting of hundreds of people would even come south to winter over with the Wendats.

Excerpt from Huron Wendat: The Heritage of the Circle George E. Sioui  pg.92

From AD 1300 to 1600, many of the ancestral communities of the Wendat were situated not only in their historic territory but also along the rivers that drained into the north shore of Lake Ontario between the Credit River and Prince Edward County.  By the 1620s, each constituent nation of the Wendat had a well-fortified village (Ossossane, Scanonaenrat, Teanaustaye and Contarea) which contained hundreds of warriors. They were prepared for raiders from the Haudenosaunee with whom they were traditionally at war.  With the exception of the Tahontaenrat (Deer), the nations also had ancillary villages and nearby locales where Algonquian communities living to the north came to winter. According to seventeenth-century Jesuit accounts, the Wendat-Tionontaté population totalled 30- 35,000 before the initial epidemic of 1634.